Marching, Morris and A Lion!

This posts title sums up my weekend rather well!

Firstly marching - our little town commemorated its involvement in WW1 this weekend. The main employer at the time of the war was the Garretts factory which amongst other things made steam engines. They were also the sponsors of the town band - the company headed the donors for the first set of instruments - these were purchased in 1886 and the band mastered these in time for the celebrations of Queen Victoria's Jubilee later that year.

Anyhow I've wandered off already. The band were at the time all Garretts employees and when war broke out many signed up to fight for King and country. They marched up to the station in the town and caught their train - many never to return. Their instruments were taken back to the band room on a horse and cart.

This weekend their march was remembered by many groups in the town and headed by the town band - now a British Legion Band.

Little son has played in this band for about 6 years now with his Dad and this weekend, he was marching just behind him - now only a few inches shorter than him! 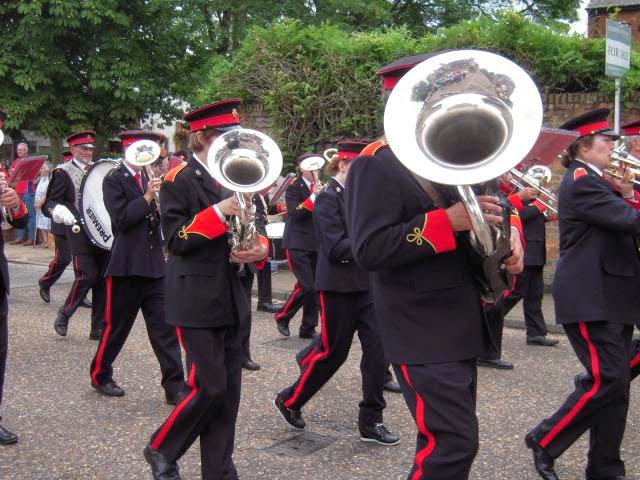 In recent years when we've had events in town one of the biggest problems has been stopping traffic from coming face to face with a marching band. It seems no longer a job for special constables or community support officers and its often left to the parade to sort something out. Its seems for this one the perfect solution was found - British Legion motorcycle outriders who soon stopped traffic. 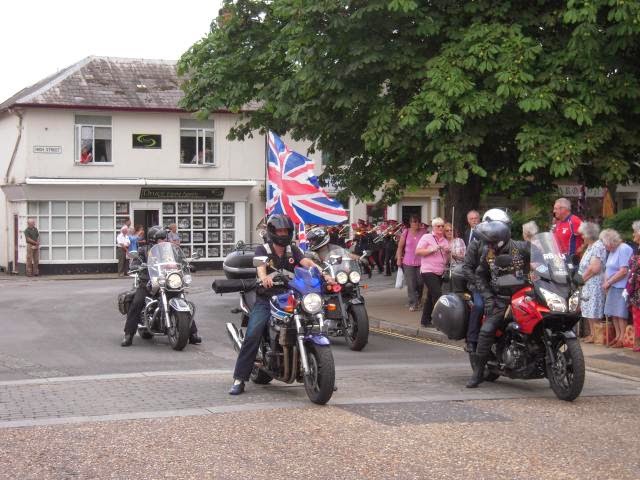 It is always a lovely sight and sound to hear the band marching through the town and this weekend there was a wonderful turn out of townsfolk and visitors to watch and listen; 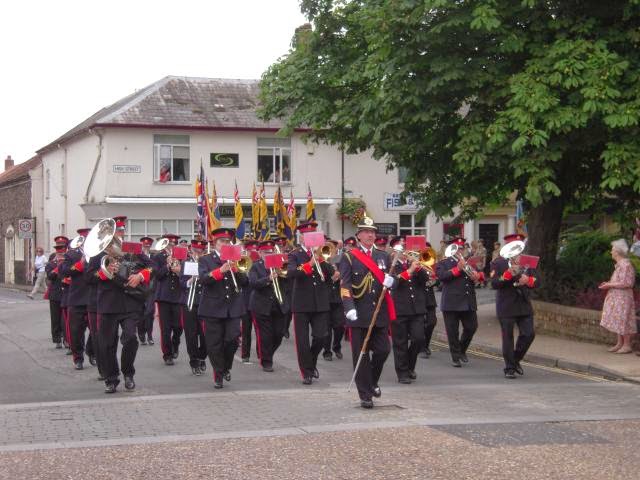 They made their way on a long route on a hot muggy day - through the town - up the hill to the old station where some of the band left the parade and put their instruments on a horse and cart as happened a century ago. Little son was one of these and when I realised he'd have been the right age to sign up and go to war, it might have made my eyes leak a little bit.

Afterwards marching to only the beat of the drum the parade made its way to the school field for an afternoon of music and community events. Sadly I'd already agreed to be at another event in the next town so had to miss this.

Yep - we were dancing again - a very hot afternoon to be dressed up in our finery and face paint. Luckily not to long a dance spot and we were sharing it with another side. They did an audience participation dance and several of our dancers joined them; 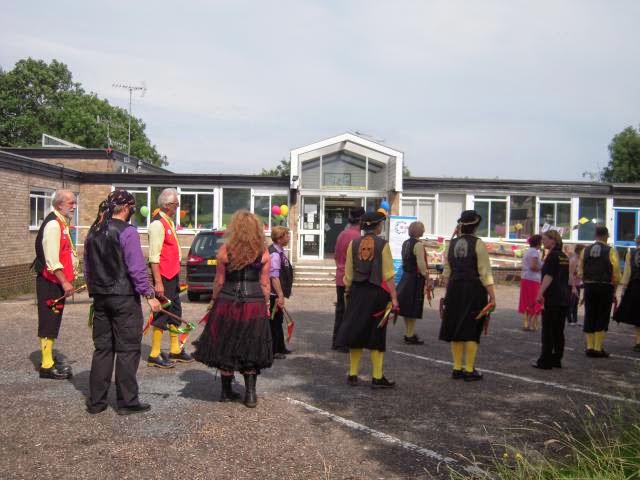 Yesterday was another hot one - so all sensible people headed to the coast - many of them visiting Little Son now nicknamed Ice-Cream boy due to his holiday job at a lovely ice-cream parlour in Aldeburgh!

However I am not sensible and certainly S isn't. We were inland at an event in his home town and he was dressed as the mascot for the sport centre he works for! Yep temperatures hitting the high 20's and he's dressed as a lion! 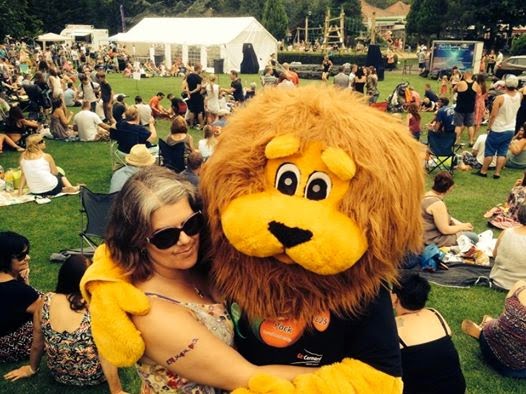 My role? Make sure he didn't stand on any small children or fall over any picnics. Also stop tweenagers trying to knock his head off - good job I've perfect that 'don't you dare look' over the years!!

Right - that's all for today. Time for a wander and to see what others got up to at the weekend.

Festival fun - in the mud!! 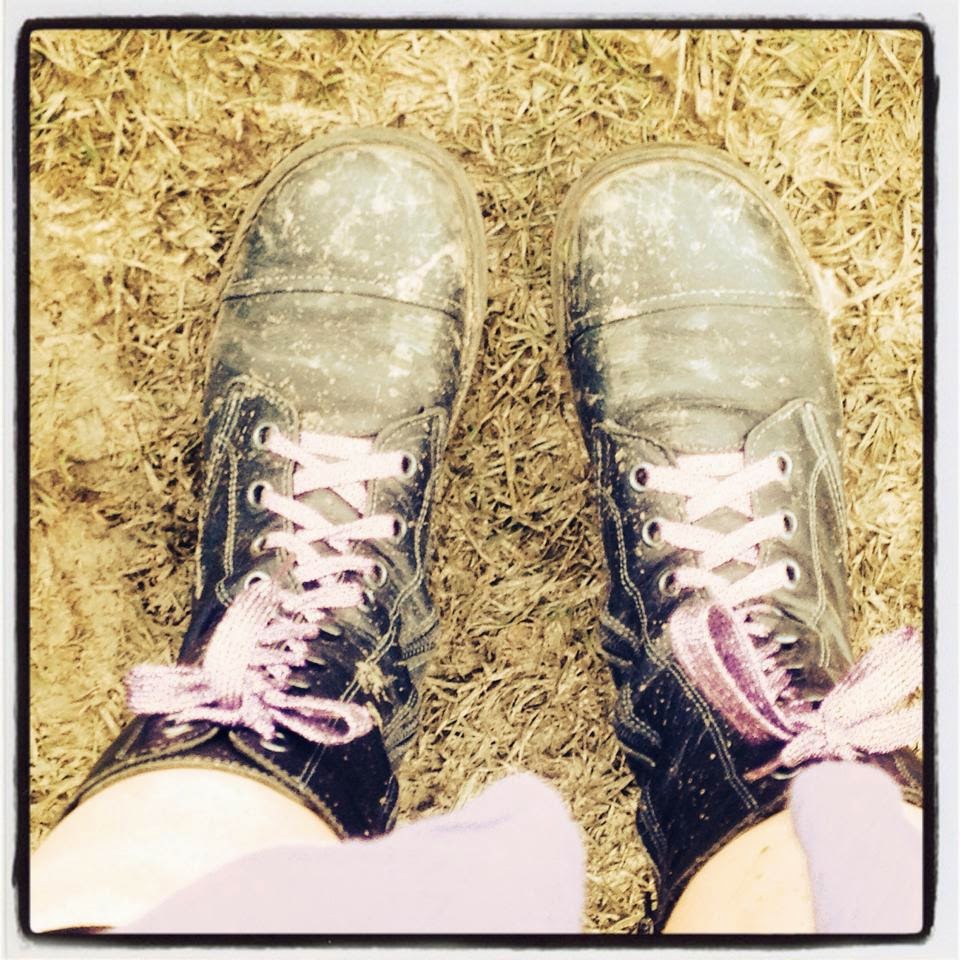 It was festival time at the weekend - Ely Folk Festival - not as dancers but as paying public!  We were lucky and sent our tent ahead with friends who were arriving early in the afternoon - they secured us a good spot which was easy to find late at night after a pint or several ;) 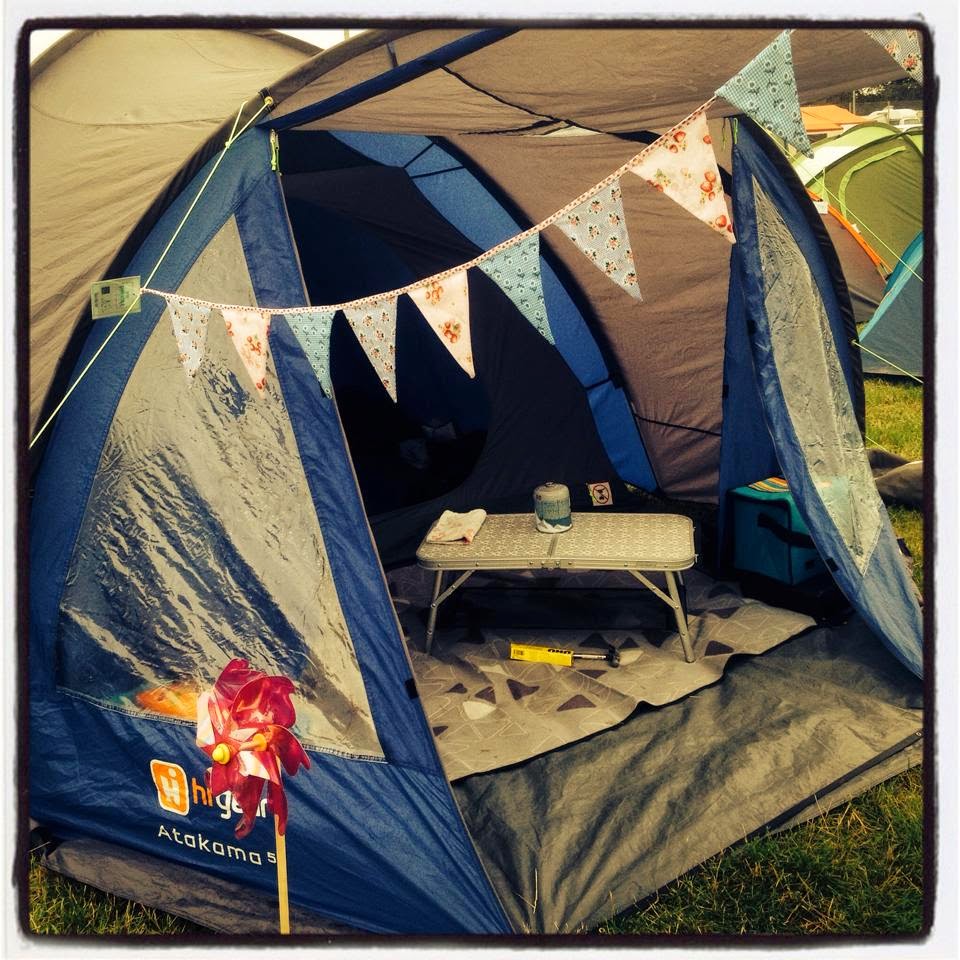 All tents need bunting and windmills don't they! And purple fairy lights inside too - and a later addition of a colourful flag as well! We've quickly adapted to camping together and can get everything set up quickly so the beer can be opened and the fun times begin.

I'd never been to Ely FF before but friends and S had and they were right - it was lovely. Quite a small festival - very friendly. There are shuttle buses running all day and evening into town and back. We headed out on the Saturday to watch the Morris parade and dancing; 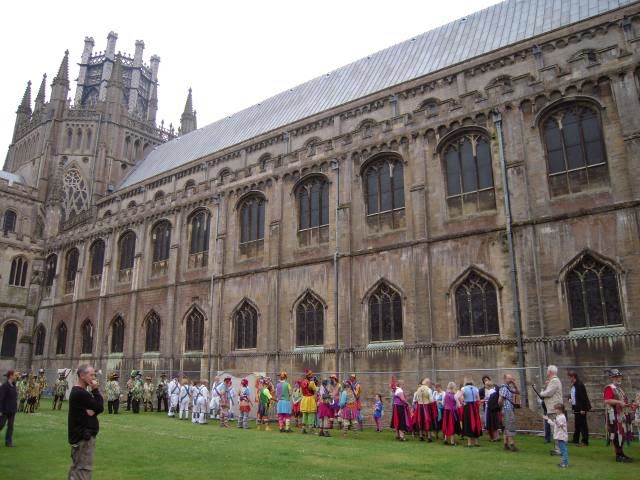 The end of the parade - dancers gathered beside Ely Cathedral. 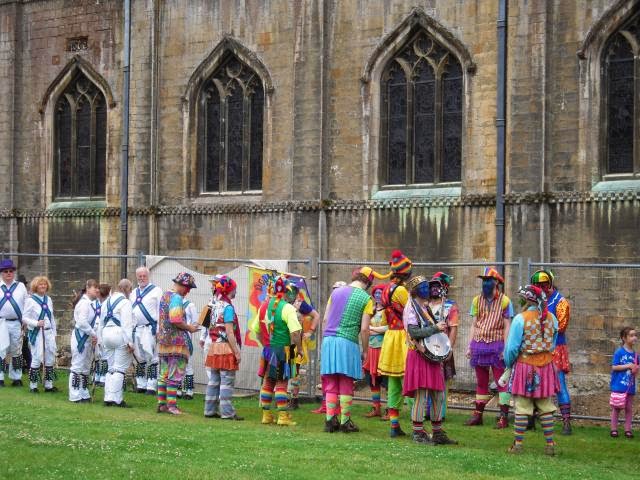 Love the rainbow outfits of this side - Gog Magog - they always make me smile. 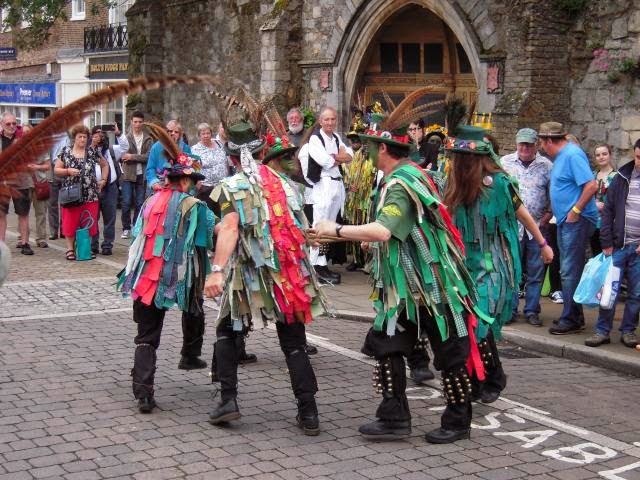 Green Dragon - lots of friends of ours in this side. 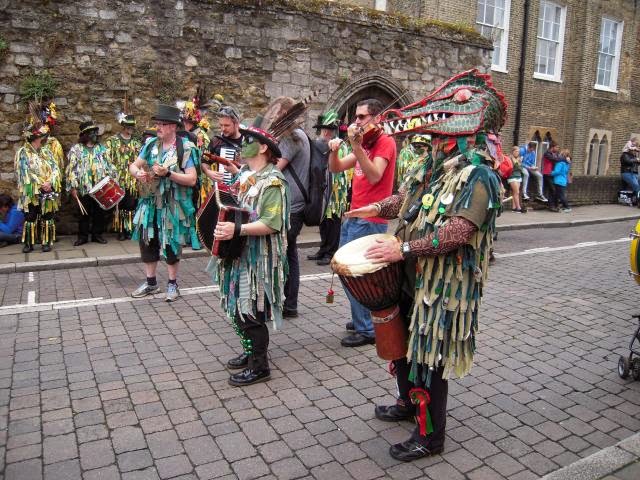 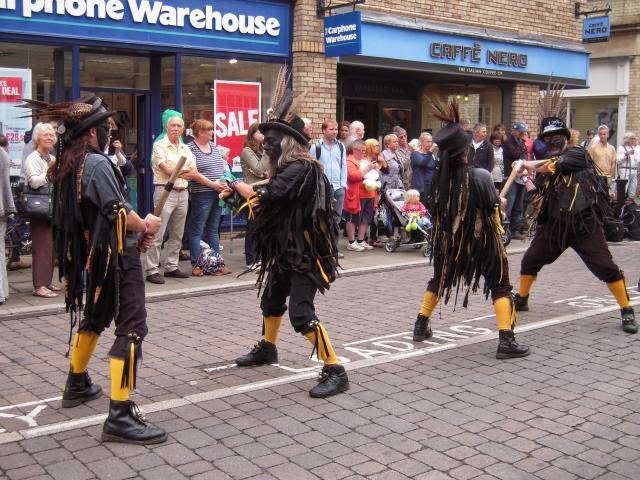 One of my favourite border sides - Witchmen - they are brilliant and it was lovely to be able to watch several of their dances without having to rush off and dance ourselves. 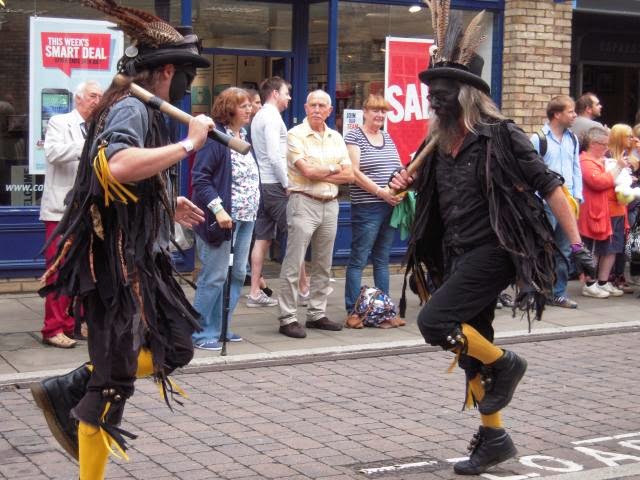 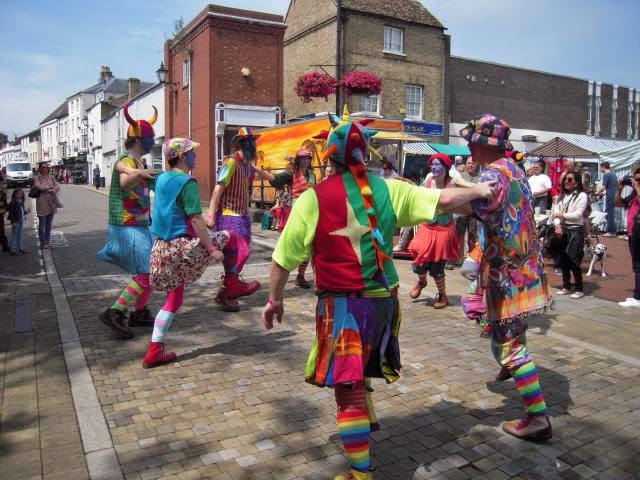 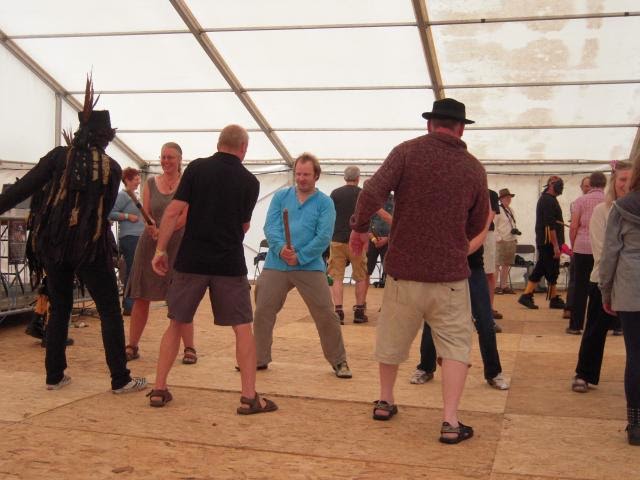 Sunday morning the Witchmen ran a dance workshop - we went over - and whilst S danced, I took photos and video and spent time chatting to a couple of the Witchmen dancers about all things Morris and teenagers leaving home to go to Uni!!

When we were watching a set on Saturday night - they announced the winners of the Club Tent competition - the prize is to open the Main Stage on Sunday night - it was fab to hear that friends of ours had won! 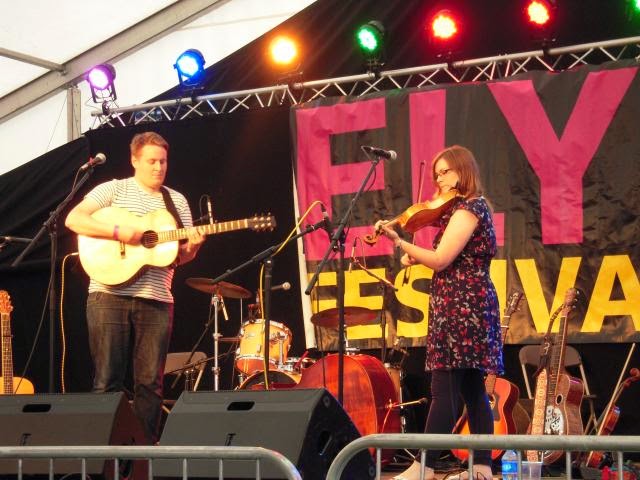 They got a 15 minute set this time - here's hoping after playing a blinder they get a longer set or two next year.

Despite mixed weather - brilliant sunshine and then torrential downpours of almost biblical proportions, we had a fab weekend. Each day started the same - I make coffee and S cooked a proper breakfast for us both; 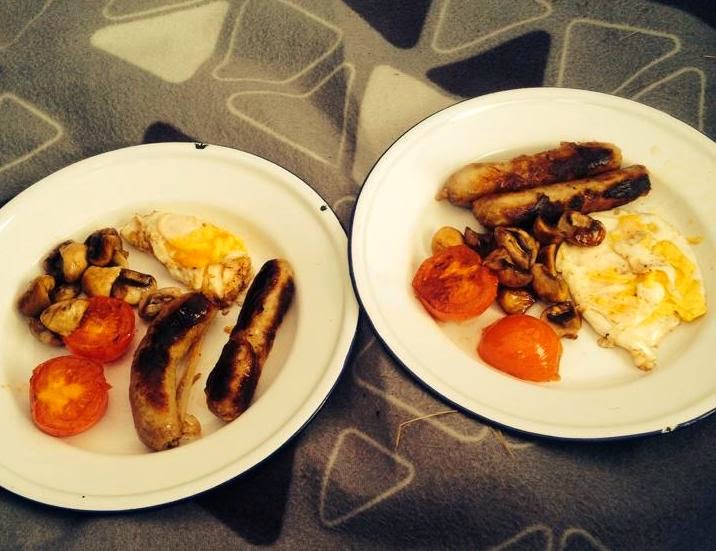 We tried over the weekend several times to get pics of us together with no Morris kit on - now it seems the art of the selfie is more tricky than teenagers make out - we gave up in the end and a random stranger did the job for us! 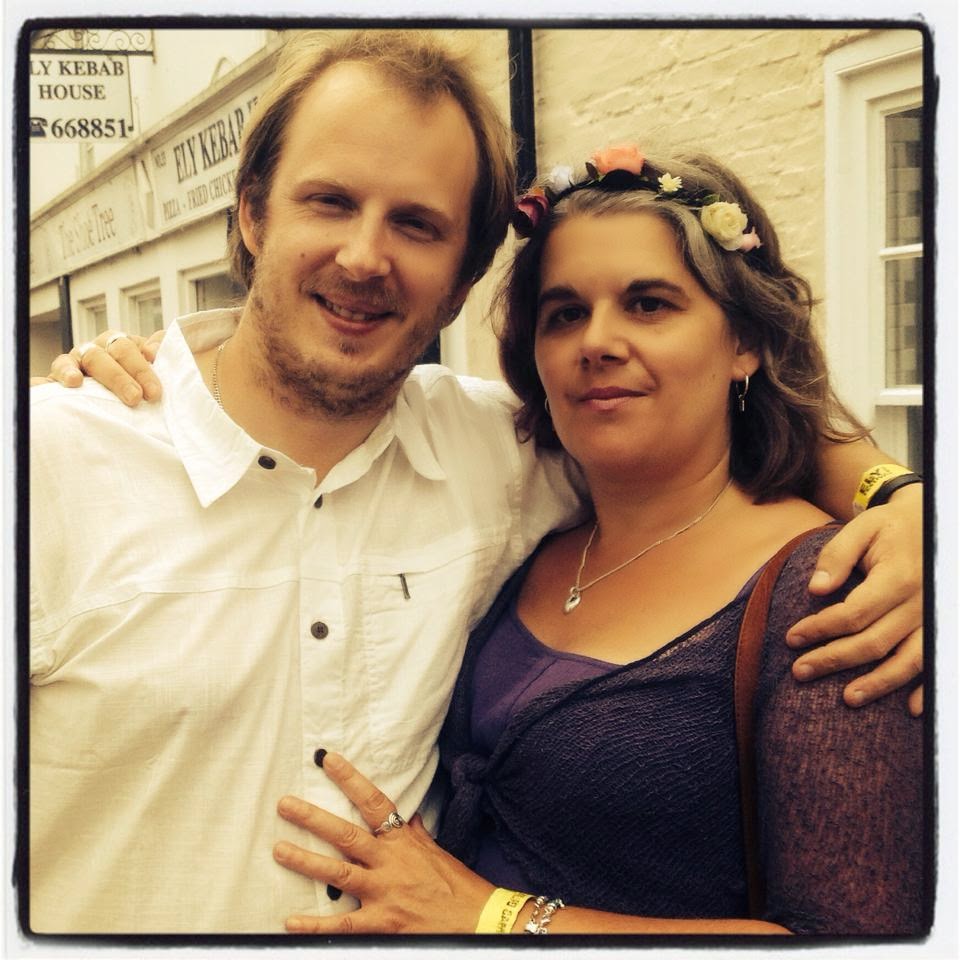 Felt weird yesterday - getting dressed and not adding the flowers to my hair - luckily its only a few weeks till back to back festivals - might just have cleaned the mud off my boots by then!

A quick catch up aka where did the time go?

Ok who is making this year whizz by so quickly? How can it be July already?

Here's a mosaic for June - very hard to pick just 6 pictures for the month; 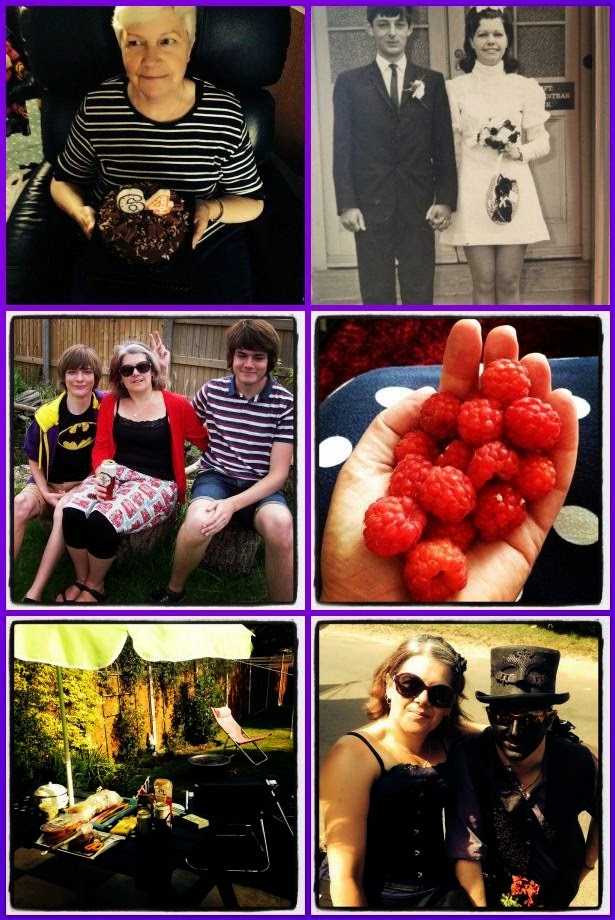 A birthday with a theme song - and of course the answer was yes ;) An anniversary worth celebrating - 45 years! A rare snap of me and my boys, the first batch of home grown raspberries, many meals in the sunshine and me and my Morris man.

On to July - 3 big events all running back to back - Big Son's leavers dinner, Little Son's leavers Prom and a big Morris event up on the north Norfolk coast; 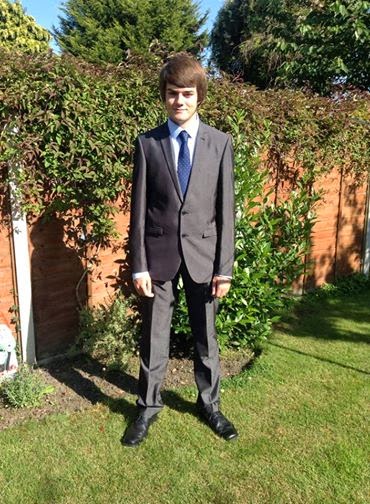 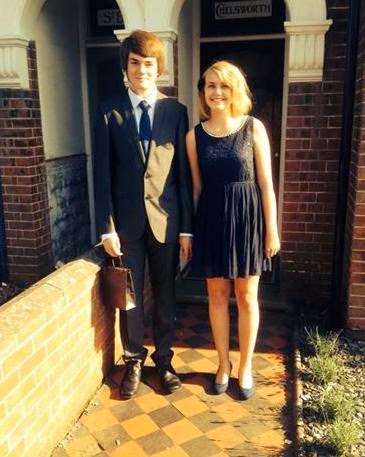 With his gorgeous girlfriend 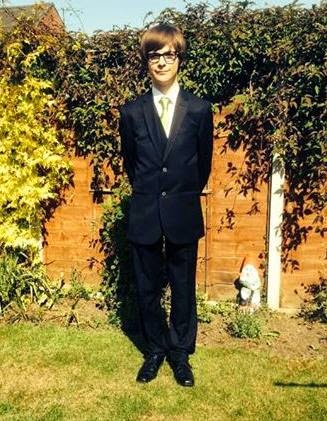 Little Son - ok so not so little anymore 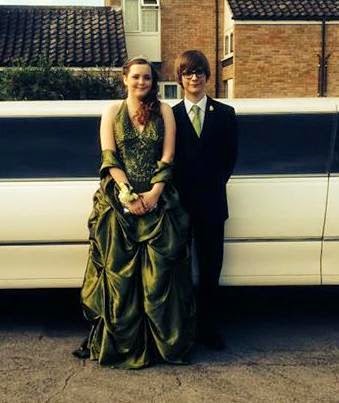 With his girlfriend - they travelled with 6 friends in a very smart stretch Lincoln limo.

Both of them had a fab time with their friends - celebrating ends of eras and beginnings of new chapters.

3 pics from a fab if wet weekend away dancing - 2 taken by someone else and one snapped by me; 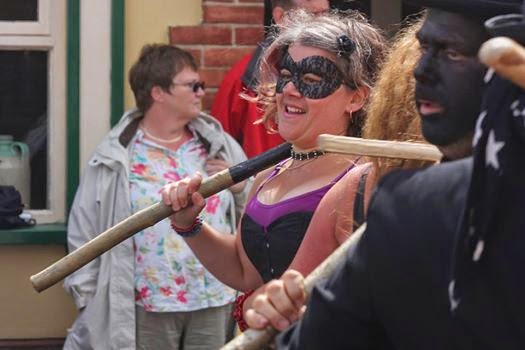 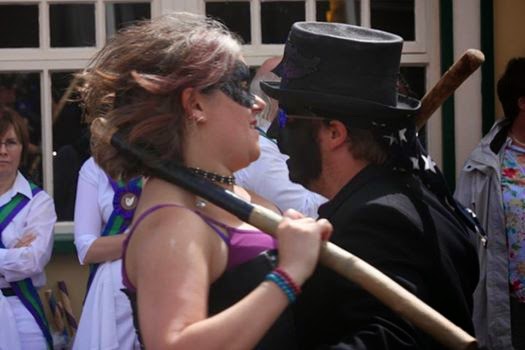 Someone got confused - he heard the phrase 'dancing' and thought it was a pole-dancing event ;) 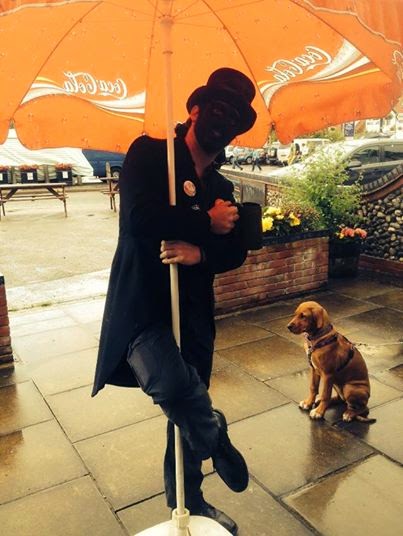 Camping gear has been sorted, washed and dried and is sitting on the front room floor awaiting another trip soon - folk festival time - here's hoping its a bit drier - still haven't got any wellies!