Work in progress, an adventure & a lovely parcel

Oh my goodness so much to tell you - its been a busy but lovely week here so far.  Today the sun has been shining & its been really warm. Another degree or so & I might start hunting my flipflops out :)

I've had another visit from the postman - this time he brought me a parcel from the other side of the world - from the lovely Kali @ Poppy Lane. I won her last giveway, lucky me - here's what she sent; 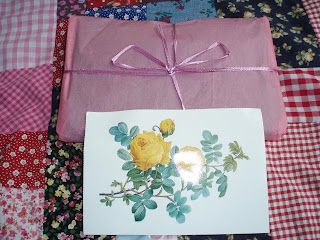 A pretty pink parcel tied up with pink ribbon & a gorgeous card :)
Oh you want to see inside? Ok; 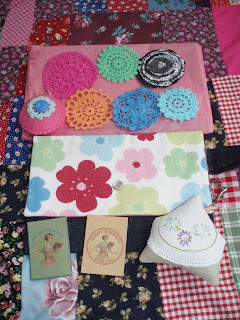 Such gorgeousness - some tiny crocheted circles, a beautiful covered tape measure, a wrist purse, some magnets & one of her lovely vintage fabric & linen keyrings.  If you've never visited her blog pop over - a very clever lady. Thank you Kali :)
Now for once its the turn of big son to get a mention.  He's been in the scouting movement since he was really quite small - about 7, and he's worked his way through earning badges & learning new skills. At the grand old age of 14 he's on the verge of moving up to the next level (Explorers) and before that he's working towards a very special badge - The Chief Scouts Gold Award. As part of this he needed to go on an expedition with a group of other scouts. They had planned their journey - using foot, bus & train and also had booked themselves into a youth hostel for the night. There they had to cook 2 meals for themselves & an adult that met them their to supervise. Here he is leaving yesterday afternoon (note the jumper & the grey sky); 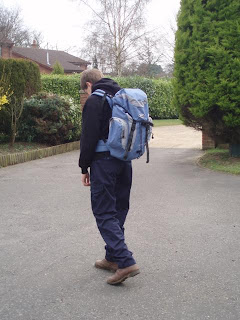 And then arriving home this afternoon - note lack of jumper & the blue sky; 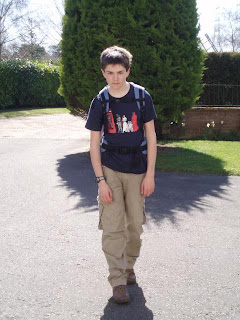 Just a couple more things to do then he will gain this special award :)
I've been having a crafting week and have definately clocked up my 20 minutes each day - probably more! 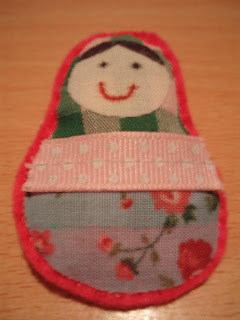 Another little russian doll - this time a brooch 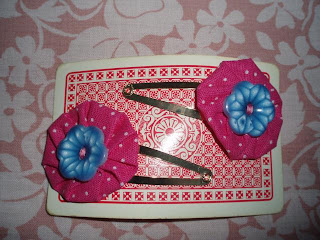 Some hairclips for a birthday pressie next week 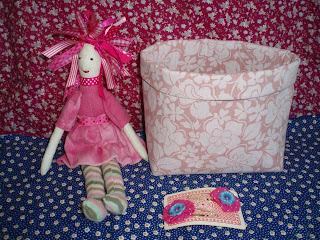 They are part of a pressie for my littlest nieces 7th birthday - she's also getting the original ragdoll & a fabric box for storing bits in.
I've also started knitting with fabric scraps & ribbon - something I've wanted to do for ages & the main reason I've been learning to knit. I think this long thin shape will eventually become a case for storing my fatter knitting needles in; 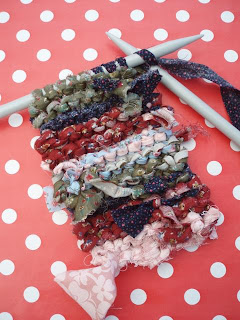 Lastly I've been wanting to make a Union Jack cushion for ages but never quite had the right inspiration - until I looked more closely at one of my birthday cards; 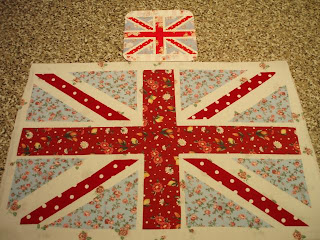 Just need to do the fiddly zigzagging around the edge - have to save that till tomorrow as the daylight has now faded :(
BTW Crafty Helen is having a giveaway so make sure you pop over & have a look.
See you soon
xxxxx Vicki xxxxx
Posted by VintageVicki at Thursday, April 08, 2010

I love your creativity! Everything is so pretty. Cx

Thanks for the mention. That cushion is going to be gorgeous. Is it bonda-webbed or rolled edged applique? I would love to make one like that. Do I recognise that blue floral fabric? Anjays in Woodbridge by any chance?xx

What fab craft projects. My little sweetpea is in the cubs (well actually two of my sweetpeas are, the middle girl and older boy - my little boy was very annoyed about his sister joining lol). Isn't it a fab club - they both adore it!

Vintage from the Village said...

Fingers crossed for your son. My daughter is in Beavers and loves it. Good value too compared to most clubs
Best wishes
Sue x

Thanks for that. I made a UJ cushion a while ago using that pretty blue floral but it wasn't in the same league as yours. I will definitely have to have another try.xx

The cushion will be lovely !! As a Cub leader, wishing older son lots of luck in achieving his Gold Chief Scout Award! L got his Silver at Cubs last year. Linda x

Lovely goodies!
Someone doesn't look impressed at having his photo taken!

Just adore your knitting with scraps - what a super idea.

Thanks for the Ernest update - I hadn't heard from him sob sob.....