Good evening - hows your weekend been?


Had quite a decent one here - lots of pottering yesterday with a big cooking session yesterday afternoon - managed to rope both boys into helping with that :) Also nipped to see my little nephew who is 6 today - what a very excited little person he was - I suspect he will have woken his parents up early this morning.
Today dawned bright & sunny as we'd hoped. We wanted to take advantage of a freebie - Heritage Open Days - this happens each year - lots of places open their doors to the public for free. Some places are open all the while whilst others are only open this weekend. We had looked through the list of places in Suffolk and settled on somewhere we've meant to visit for a long while but never got round to - West Stow Anglo Saxon Village near Bury St Edmunds.
The village is set into some beautiful countryside which you can visit at any time for free - the advantage today was the Village & Museum were also free to visit. 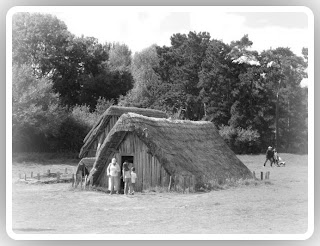 The houses have been recreated using the original post holes & styled by using archaeological evidence found on the site. There are several different buildings on the site - houses, a weavers room and a meeting hall - these are all slightly different as they've been built at different times as theories have changed.
They've also recreated the rest of the village - I just loved the gardens with their heritage varieties of veg and also the Saxon scarecrow!! 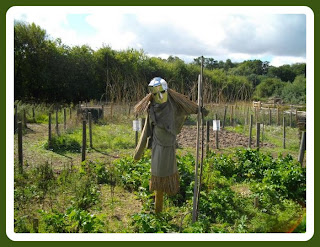 The museum was very interesting - lots of treasures that had been found on the site and also in the surrounding area. I wish I'd been able to take pics of the needles & weaving equipment. There were plenty of hands-on items too. The boys despite their sometimes 'we're too old to do stuff like that' attitude were keen to try the replica helmet on; 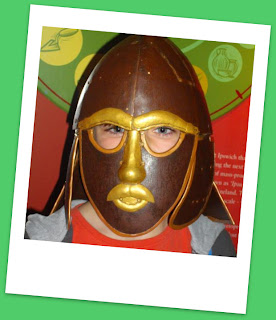 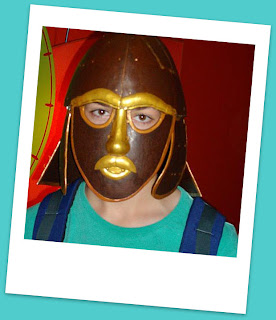 As well as visiting the village we followed several of the trails around the park and along the River Lark; 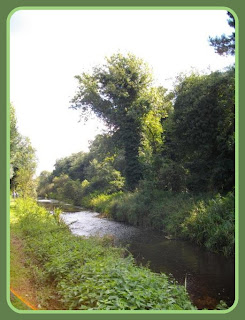 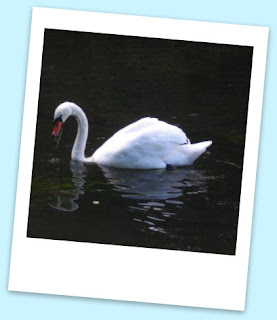 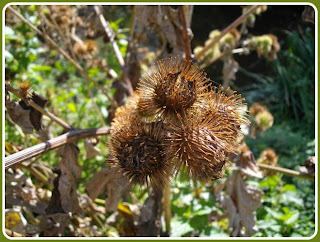 I tried so hard to get a picture of the damselflies - they were just too quick for me!!
On the last part of the walk as we were heading back to the car - little sons legs 'got tired' - so kind of his brother to give him a lift!! 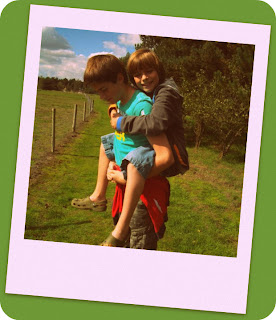 Glad you had a lovely time- that scarecrow is a little scary! Where did this weekend go? x

It looks great! Son 1 is wondering how much he is going to have to grow before he can carry his brother...

We went to somewhere very similar when we were in Ireland in the Summer, great fun ...

What a great day out. I hadn't heard about this but it sounds fab. I do hope that you enjoy the swap.xx

Oh, we've been meaning to go there for about, oh, four years and never made it. Now you've spurred me on to get the old arse into gear and pay it a visit. We went to a similar place just south of Inveraray, name escapes me, but very atmospheric. Your photos remind me very much of it. Hope all the school stuff is flat and smart, Ax

Looks like a fun day out! Love the last picture.

That looks like a good place for a Sunday outing......especially for boys, they look like they're ready to do battle in their helmets.
florrie x

Fabulous day out. The Heritage weekends are such a good idea.
Lisa x

Heritage days are such a great idea - your day out looked lovely. Love the last photo!

West Stow looks lovely in the sun - when I went on a school trip there was snow on the ground. The little houses were unbelievably cold inside!

It's a great day out isn't it, we used to take the children there when they were younger.

Hello! Looks fab! Yes we are going to Henham this wkend, we'll be there both days :)Come and say hi if you are there, we'll be with the green stuff ;)

just found you thru Penny at the Hen House. Love your blog. Suffolk a beautiful place. We were stationed at RAF Bentwaters/Woodbridge back in the late 1980s and early 90s. I loved it there. I now live in Lincolnshire and while it is ok, I prefer Suffolk!