2 have fun in Dorset

We are not long back from a fabulous mini break in Dorset - staying in a Shepherds Hut next to a steam railway line - just how Famous Five is that!!

We booked this trip in the cold and damp early part of the year - before we'd sold the flat and when we were caravan and tent less. (Our little caravan has retired to be a children's play hut - it was no longer fully road worthy & had some furry visitors living in there over the cold long winter).

We'd looked at cottages but nothing had really appealed - had almost given up when S showed me a picture and I immediately said 'Yes'. 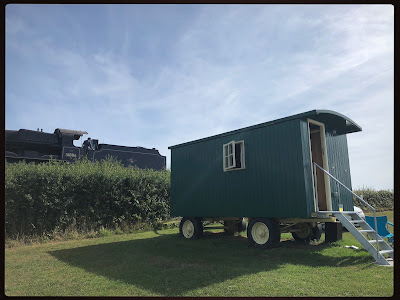 This took me several attempts to get!! Those steam trains don't half move fast!! Outside was gorgeous - but inside even better. A cosy bed, plenty of storage, a little stove for cooking, a fridge for keeping tonic & cider cold and even a proper flushing loo! 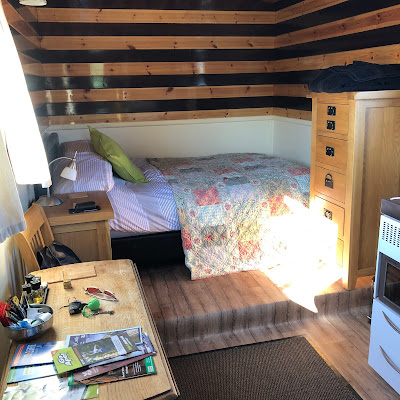 One worry was whether it would be too hot at night but the windows allowed through breeze and we both slept so well - possibly aided by lots of walking and some Dorset beers & ciders!!

We left home early on the first day to make the most of our 4 days. We were on the beach at Studland by 10.30! and in the sea not long after we'd set up camp. Two things to note - Vicki's do not normally do the sea nor do they wear a bikini! However the water was calm, not to deep and very inviting - also I had found a perfect 50's style bikini which covered bits I am less keen on and actually flattered my curves!! 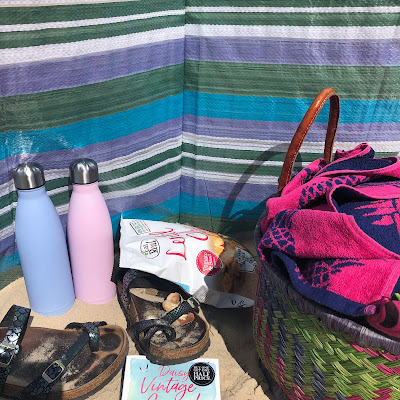 Just lovely to feel the sand between my toes. 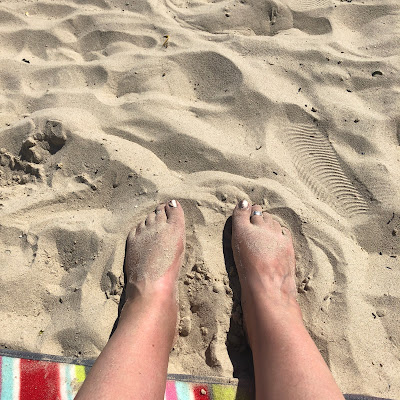 We spent several hours on the beach - in the sea and then having a picnic and reading.

We left early afternoon and headed to the campsite - unfortunately we chose to arrive when the campsite office was shut - so decided to head into Corfe Castle village for a wander and to get some essentials. S remembers visiting here as a small child and we went to find the pub his family used to visit - currently closed for a refurb - never mind there were plenty to choose from, we ended up at one in the shadow of Corfe Castle; 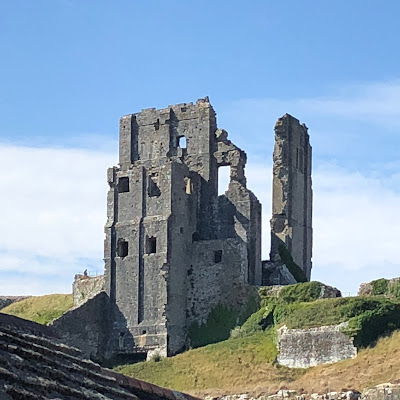 One pint of Dorset beer and one of Dorset cider - all accompanied by a one man pub singer who played a montage of popular tunes! 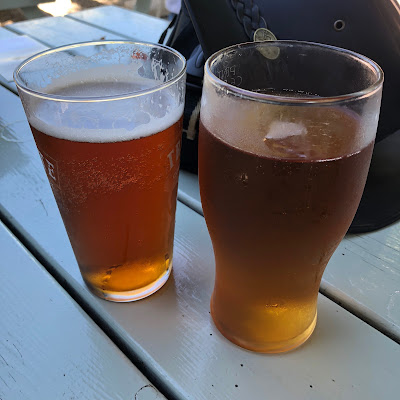 Up early next day as the sun was peaking through the curtains. Time for coffee and bacon sandwiches; 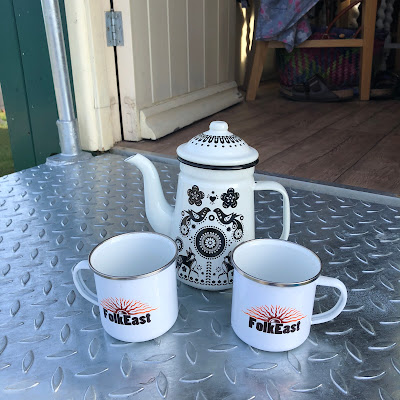 We had planned to spent most of the day in Corfe at the castle and then a trip into Swanage on the steam train.

We found possibly the last parking space in Corfe and headed up the footpath to the Castle, stopping for a quick game of Pooh sticks; 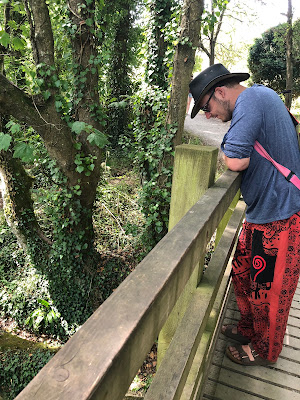 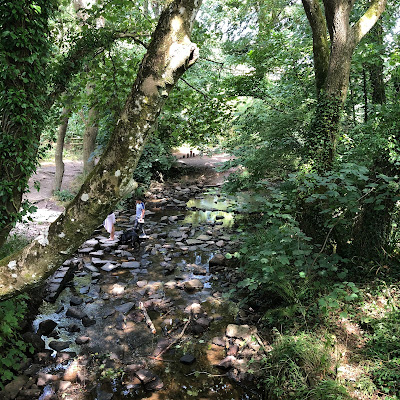 So cool in the shade of the trees - quite a contrast as we walked up the castle mound; 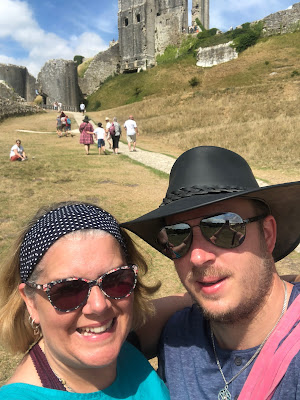 W eventually made it up there - the views were stunning - even those of a trackside fire caused by a spark from the steam train!! 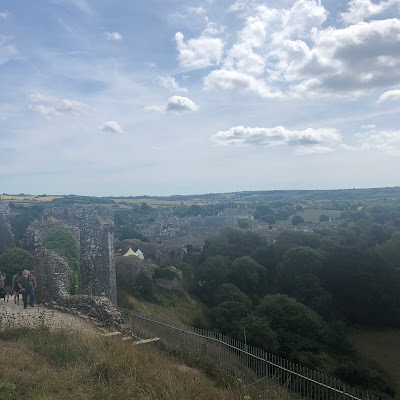 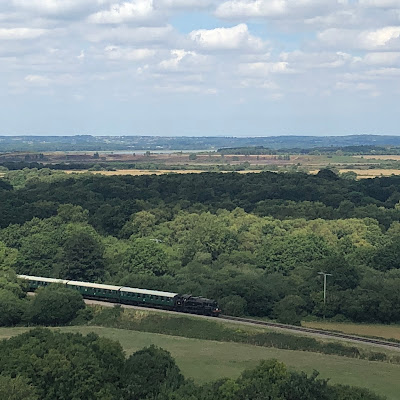 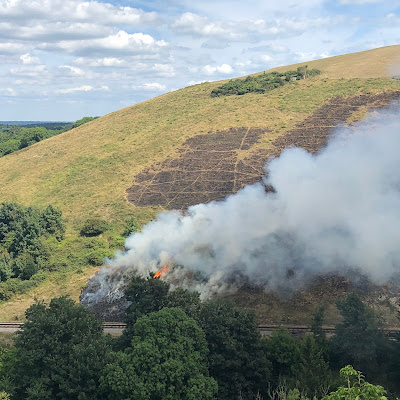 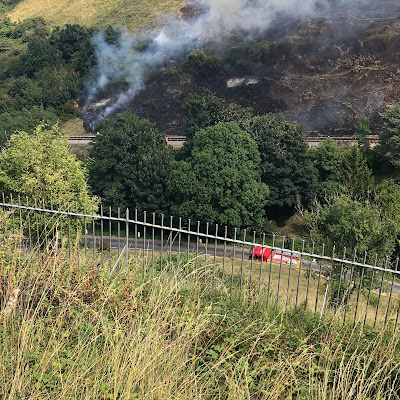 Seems this happens quite often and Dorset fire service have a cute little 4x4 which can scale the countryside to reach places the bigger engines can't!! 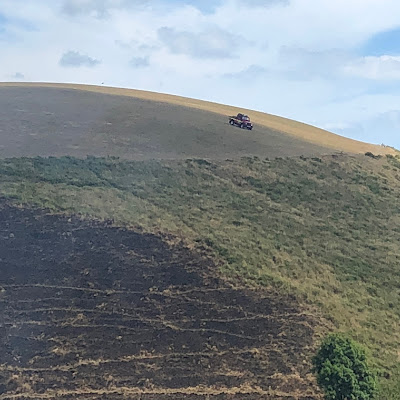 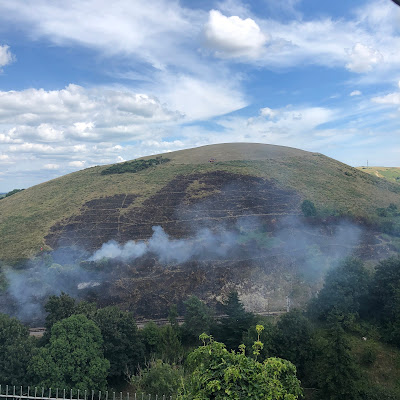 After all that excitement - time for a cream tea in the National Trust tea rooms; 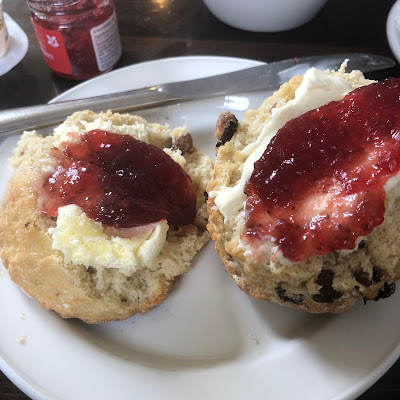 and then a quick wander to catch the train - they were running again at this point. 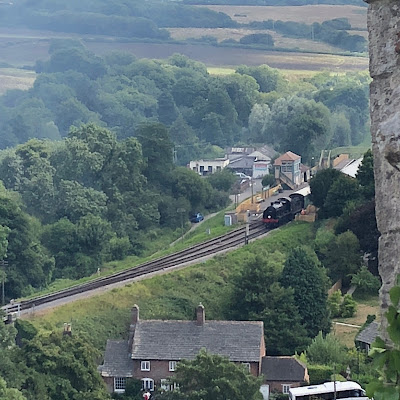 You do get a lovely view from the train; 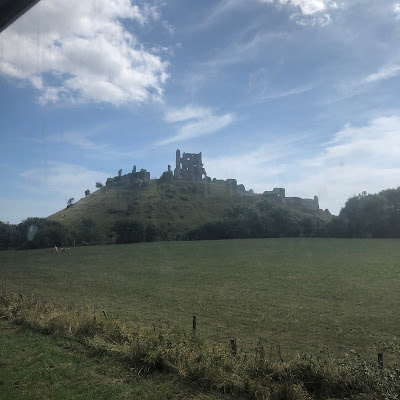 Even one of our hut as we passed the campsite! 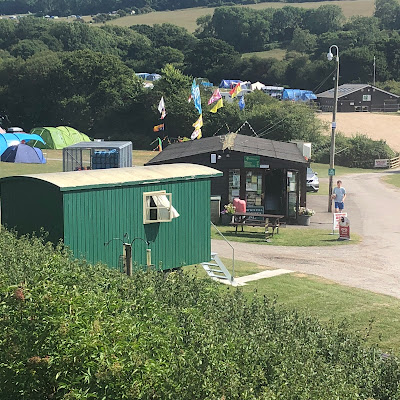 Swanage is a fairly typical seaside town - lots of shops selling postcards, inflatables for the sea and all sort of holiday souvenirs. We opted for fish & chips on the seafront washed down with ginger beer (what else!).

Time then to head back with some more cider and watch the sun set; 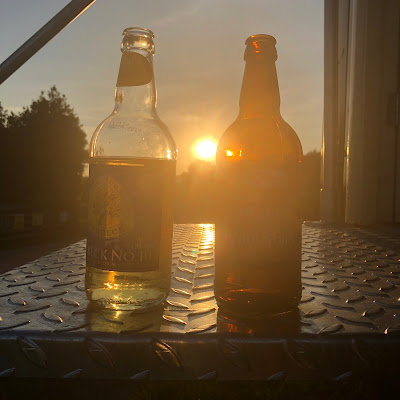 Day 3 and up early for a similar breakfast to yesterday. Then time to get the chain ferry over to Poole and catch a ferry to Brownsea Island. I am not a boat fan but the water was dead calm and soon we were on our way; 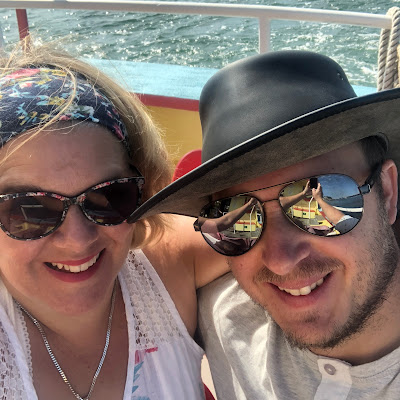 Brownsea Island is gorgeous - I have wanted to visit for years but the boat fear has always stopped this. 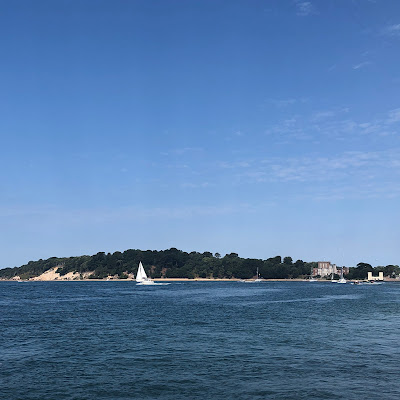 We got a map and headed off on a long walk around the island - the views are amazing;

We did manage to see red squirrels but they were far too quick and no photos were managed.

My giants were both Beavers, Cubs, Scouts and Explorers so I wanted to visit the site of the first scout camp - 111 years ago; 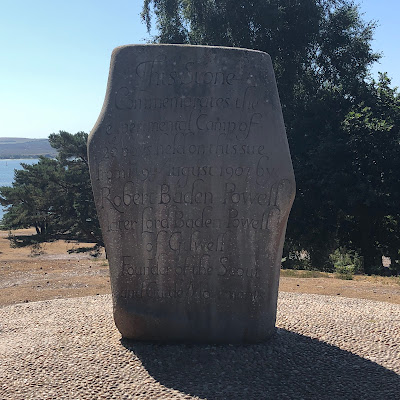 I loved the huge collection of brightly coloured scout scarves from all over the world; 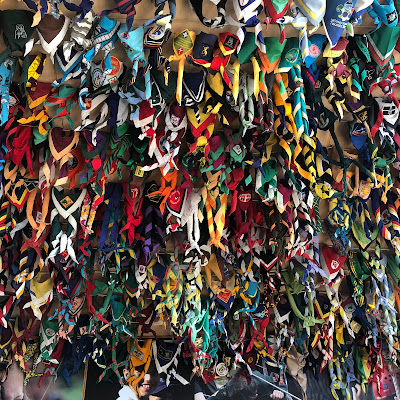 Time then to make our way back to quay for lunch before the return ferry; 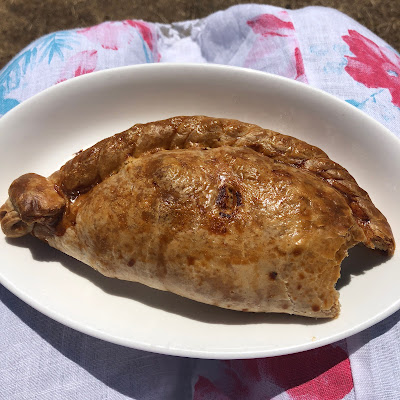 You are always guaranteed a good pasty from a National Trust tea room!! This one was no exception - keeping it safe from the gulls was a bit tricky!!

Time for one last campsite dinner and then packing to do.

We spent a final morning on the beach on Monday morning before coming home.

It was a short but packed long weekend and we are already planning a longer trip next summer in our bell tent. We treated ourselves to one this year once we knew for certain we'd be moving and have space to store it; 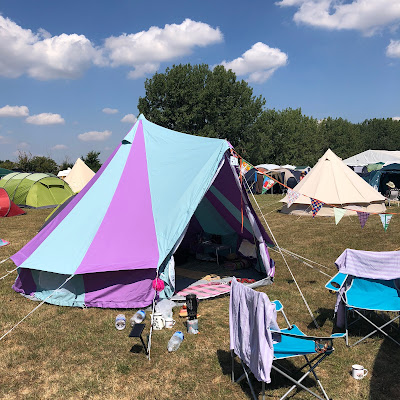 Here it is at Ely Folk Festival last month - it has another festival to go to soon and camping trip is planned for the end of the holidays too! Next time I will get pics of the inside - we have this glamping lark sorted - a comfy bed, colourful rugs and a proper duvet all make camping great fun - oh and fairy lights too!!

Posted by VintageVicki at Wednesday, August 08, 2018

“As a military family, we are very thankful for Mr Lee professional service. he was attentive, knowledgeable and took his time to walk us through the loan process. We were informed in a timely manner of any pertinent details we needed to take into account. He was very approachable, understanding and trustworthy. We can’t thank him enough for his excellent service. We highly recommend his and feel blessed to have had his loan assistance to enable us have our home purchase. Military and non military families, Mr Lee  you would want to work with for your home purchase & any kind of loan asistance!”
Mr Lee Loan Officer Contact Details:WhatsApp : + 1-989-394-3740E-Mail: lfdsloans@outlook.com