Its been one heck of a year - a serious roller coaster ride - some highs and some lows. Looking back at it all now - wow what a year - a dodgy soap script perhaps? All in all its been ok - lovely new house, a gorgeous new nephew, new hobby, new friends, amazing old ones who've really stuck by me and helped more than they'll ever know, that long hot summer, lots of camping, dancing, live music and spending time with my two wonderful boys who have grown up so much this year. In just a few days time - Little Son turns 16 and then 3 weeks later that Big Son of mine will be officially an adult - 18!!

I've taken quite a few photos this past year and I put them neatly into monthly folders on my pc - here's a mosaic of a favourite from each month - there's a strong theme running through I think!! 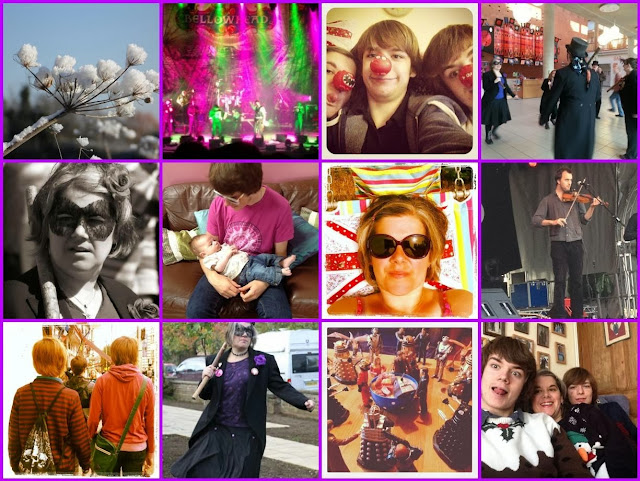 January - Snow and lots of it
February - Live music - Bellowhead in concert
March - Red Nose Day
April - My first Morris dance out - I was so scared!
May - First Morris festival - no nerves :)
June - Big Son and Little Nephew
July - Me - recovering from surgery in the sun
August - More live music - Jon Boden at Folkeast
September - My boys in Cambridge visiting my little brother
October - Last dance out of the year
November - Doctor Who's 50th celebrations at No6
December - Us 3 on Christmas Day in our Christmas jumpers

I think 3 things that sum up my life rather well - family, music and dancing.

Talking of family - we sort of managed it - 6 cousins in one phone - not all looking the same way and some pulling lovely silly faces as only small boys can; 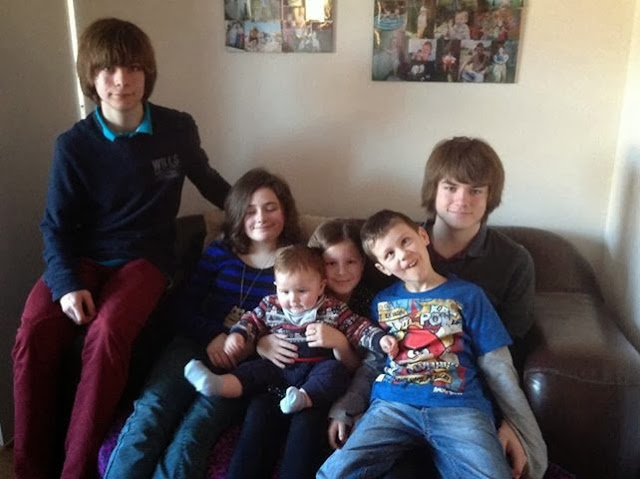 Here's to much more of that in 2014 - lots is already planned - concerts, festivals, more dancing and family fun and I know I'll be sharing plenty of photos with you.

Thanks all for visiting, commenting and emailing in 2013 - its meant such a lot to me.

What a lovely round up of your year. Here's hoping 2014 is a good one xx

wishing you all the very best for 2014 Vicki, may it be filled with fun, family, and fab morris dancing xx

Wishing you all the happiest of new years.
Lisa x

Thanks so much for sharing your year, here's to a fabulously Happy 2014!

What a lovely post, so glad you have the all clear from the hospital it must have been rather scary.
Here's wishing you all the best for 2014

Take care my sweet, you deserve the best year next year, you really do. Bless you all.

What a year you have had, but you have come through the other side! I hope 2014 is kind to you and yours xx

Happy New Year! I hope 2014 brings you only the best of times. XO

Family, music and dancing - love it! Wishing you a wonderful 2014,
Jo x