What a mixed day its been. Glorious sunshine this morning and springlike temperatures and then after lunch, it went grey & misty and I had to rescue my washing from the line.
During the sunny spells this week its made me realise that some serious spring cleaning is needed as the spiders appear to have been working very hard indeed. So once the craft fair makings have been completed I shall be arming myself with a bucket, pile of cloths and making my house shine.  I had a little go this afternoon, I'd treated myself to a pink primula this morning and thought it would like to live on one of the kitchen windowsills - after moving things around I realised that this was not a simple task. Instead the windows had a clean and the sills cleared and tidied. 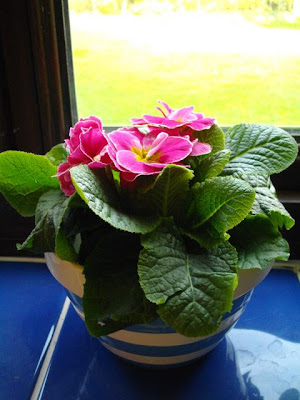 A wander around the garden this morning found loads of spring flowers in bloom or just about too burst open; 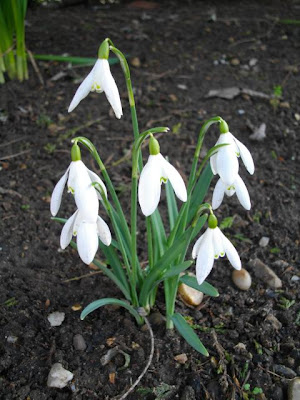 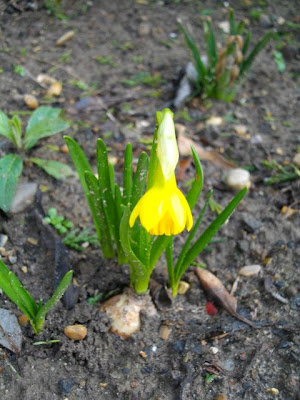 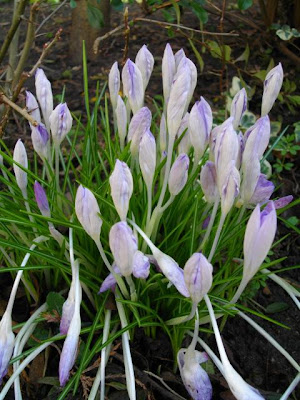 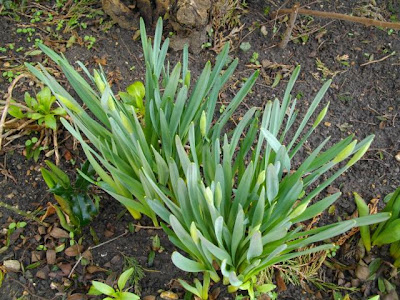 Here's hoping half term has plenty of sunny days and then these daffs might open up and make the garden feel sunny.
As I said at the beginning, I've been busy making more stuff to sell - I've become rather addicted to knitting/felting and so far this week, 3 purses have been produced - the russian doll one was for a friends birthday. She was delighted with it when I handed it over @ S&B last night. 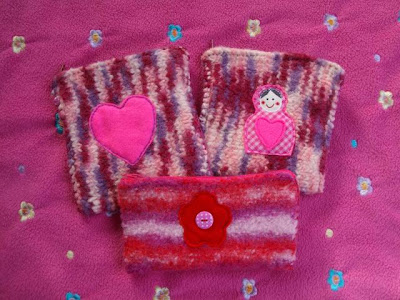 Hey, your bulbs are WAY ahead of mine!!! What's going on there?

Those flowers look so cheerful and full of a promise of a glorious spring. I fear we may all shiver a bit still though before we can really bask in any sunshine..can't wait!
The purses look great, I am sure they will be snapped up.
Have a great half term, Jenny x

Here's to a half term filled with sunny days, lovely lie-ins and lots of knitting and crafts taking place.

Your flowers are looking so pretty and I love the purses. Hooray for half term - we are looking forward to some lazy mornings too! Have a great one xx

Hi Vicki, I love your flower pics and those purses are just beautiful!! Such a lovely Springy post, has really cheered me up thanks for sharing! Sarah x

Your flower pics are lovely. No sign of flower loveliness in our garden just yet but lots of green shoots. Sweet purses.

We seem to have the reverse of your weather today ... hope it stays dry for next week so we can go for some long walks (will need to take my mind of not being able to shut myself away with sewing etc). Lovely little purses .... will have to try this felting it looks so good. Happy half term x

Beautiful flowers, we can't wait for half term here either... Lets hope the weather stays half decent! Sue :)

Oh and thank you for recommending that book, it looks ideal Xx

I love your pics, very cheery! Pink prims are my fave!

WOW. These flowers are SOOOO pretty!!!

Half term already - how quickly the year is going. Your Spring bulbs are delightful as indeed are your little purses.

Your snow drops are lovely mine have come out to and i think my dafs are growing at the same speed as yours ;-)) I love those purses there real cute are those knitted? and then felt lined inside? Enjoy your half term my boys and myself are ready for it to, im praying for dry sunny days ;-)) dee x

Hope you all have a wonderful half term week together.
Spring is definitely in the air!
Lisa x

Prettiest purses too, did you make that lovely Russian doll applique?

Have a super half term.

Your flowers are looking great, ours are nowhere near that far along though! Up here we're actually predicted snow again tommorrow! The felted purses look lovely, I really enjoy putting knitted items into the washing machine to see how they come out! :) x

Think we're all ready for half term here too :) x

I have one little snowdrop out in the garden...I think a bird must have dropped the seed because I didn't plant it! You have so much colour already and your daffs look ready to flower any day now.
Hope you have a great week and the sun shines for you! :0)

Your felt purses are adorable. A few bulbs are trying to burst forth in my garden but not much yet.

Lovely purses, we are also very much looking forward to halfterm. I am looking forward to not having to scream and shout at my 'far too old and should know better' son's, that the bus will NOT wait for them in the mornings, mum does NOT drive and can't just run them in, if you miss it YOU will have an hour till the next one!!

Have a lovely weekend and a fabby half term break xx

So loving the flower photos, yippie, spring is on it's way! Just came across your blog today, am now following. Have a good half term.

oohh what lovely Spring like photos and love your felted wool makes, really must learn to do that!

Gutted!! My crocus's are only just poking through the rain sodden earth!! Enjoy half term - Aberdeenshire council rather meanly only granted us 2 days 'mid term' break as they called it, but i enjoyed every lazy minute xx

You had me at Gnome.