Not a VW camper but a caravan :) If Wayne Hemmingway has decided that the 90's are vintage enough for his Vintage Festival this summer - then our new toy can be described as 'vintage'!!

Here he/she is (not named yet) in all its 22 year old caravan glory; 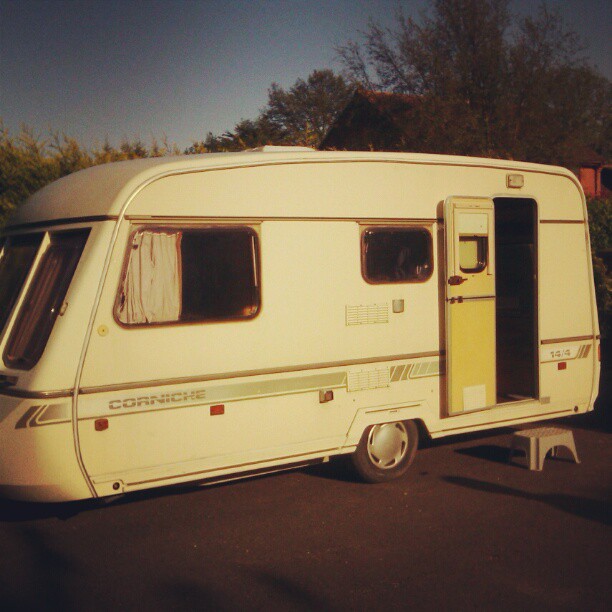 It needs a bit of a clean inside and out as its not been used this year. However it has lots of space and potential. I shall take some before pics tomorrow and I'm sure over the next few months after pics will be taken as we head out and about on our hols :)

MrVV left Suffolk by 3am this morning - called me from Yorkshire by 6.30am where he was having breakfast - had time to go via bits of the Lake District before collecting the caravan as planned at 10am. After a quick tour of how things worked and what goes where he was heading home. The sat-nav said by 6pm and he was here showing up around by 6.05pm!! What a day he's had - I don't think he'll be late to bed tonight!

BTW I didn't burst - just had that feeling all day of excitement - like a small child gets on Christmas Eve!! (actually I still get that Christmas Eve too!!).

Okay. So I was being thick wondering how he was going to drive two motors back...
Sleep well Mr VV and you, Missus. Stop dreaming and planning and get some Kip.
Ax

Congratulations! What a fun summer you will have.

Woo hoo! How exciting. I'm looking forward to seeing it transformed. It'll be like having your own play house. I have to say I wouldn't fancy towing one though! Have fun...

Fantastic! I am SO envious! You must show some more interior pics of it. I love, love, love caravans.

You are going to have a wonderful time fixing up the caravan. Then what a wonderful summer you will have, lets hope the weather is stunning.

That was a long old day! But looks like it was worth it! Wishing you many happy hols inside your new home on wheels.
Lisa x

Oooooh! Exciting or what?
I wonder what you'll call her? You're all going to have loads of fun and adventures!
Do pop by and enter my giveaway!:0)

oooo how exciting i cant wait to see what you do with it!:)

Wow, it's great. What a drive and a half but totally worth it.

OOoh lovely! I bet you are in your element, cleaning and prettyfying it.
Kandi x

What an epic journey, but well worth it! Are you taking it to Latitude? x

Fab!
My mum has that van!
She is getting a new one this year!
Maybe someone would like the old one!

Can't wait to see it's make over!
MX

The caravan looks great, you'll have so much fun holidaying in it! :) x

Wow, so exciting!! I cannot wait to see the things you are going to make for it. :)
xx

Very envious! I would love a little caravan and be able to pootle about all over the country, bliss. Enjoy xx

Oh Wow im so excited for you ;-)) I can't wait to see how you furnish it ie curtains and chair covers etc ;-)) Enjoy it, dee x

Oh I'm so jealous! Wha fab fun you will all have....brilliant!