Blimey, where has this week gone? Seems to have past me by in a whirl of cooking, cleaning, crafting and a bit more cooking thrown in!!

Today has been rather good - Country Girl and I headed to Aldeburgh this morning for a moochie around the shops and of course coffee & cake :). You can see on her blog her shopping success ;).  I didn't find anything that took my fancy not even in the charity or 2nd hand book shops.

After lunch I decided that I'd cycle into town to post some letters, visit the greengrocers and have a looksie at our charity shops. BINGO, I struck lucky - a Boden wool jacket - in my size & colourway - not only that it has hardly been worn & only cost £10 :) 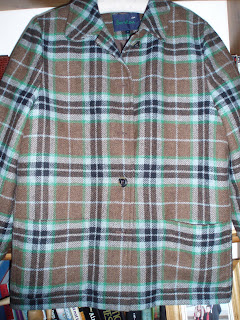 The other thing I thought I'd show you today also comes under my resolutions for 2010 - praise the boys more.  Big son made this pencil case at school for his art pens & pencils.  Now bearing in mind he's never used a sewing machine before and he's fairly cack handed most of the while, I thought this was rather good; 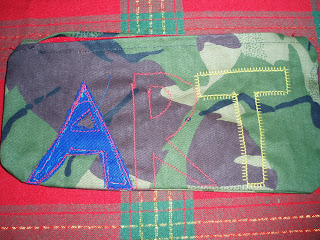 I was most impressed that he'd sewn the zip in himself on the machine and that the whole thing is entirely his own work - so well done big son :)

My knitting is coming along well - dishcloth is finished and just needs its ends sewing in.  I've started now knitting squares when will eventually be turned in a blanket.  Am impressed with myself - can cast on & off and do a knit stitch - next target is purling & ribbing :)

See you at the weekend with another birthday post - this time little son who will be 12 on Sunday.  He's been full of it this week not only has he got a birthday to look forward to but his violin he's spent his christmas money on arrived.  Naturally for the lively person he is, a plain wood one was not good enough - instead he chose this rather cheerful red; 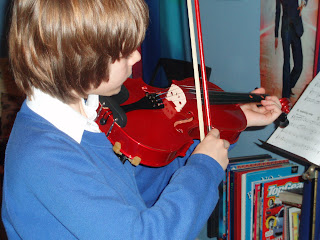 Posted by VintageVicki at Friday, January 15, 2010

I'm VERY impressed with that pencil case,and the red violin is a very good choice.What talented children you have!
Great CS buy,and those needles will be 'flying' soon!

I too think the pencil case is great and am very impressed. We love a bargain don't we, I haven't been out shopping apart from essential food since before Christmas. I'll probably go berserk when I do start.

Well done DS1 on the pencil case and also to DS2 for saving up for your own violin! How lovely to have a musician in the family. We still have DS1's violin that he started playing on when he was 4. Sadly he gave up a few years later. A waste of a talent.

made with love said...

Now I am very impressed with that pencil case well done to him.
RachaelX