As its the start of a new year, then its time to make resolutions that I'd love to be able to say come December 2010 I've managed to keep!!

Managed to make a tick against that on Sunday night when the boys went out to a badminton club party & tournament.  Just me & MrVV for dinner - cue grownup looking table ;) 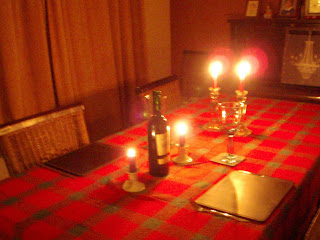 2 - Keep the house at an acceptable level of tidyness - not house proud but also not in need of a visit by Kim & Aggie! Also accept that I am as messy as everyone else and I can't complain about their mess if my stuff is everywhere too!

3 - Learn to knit.  Am prepared for S&B group on Wednesday. Have bought my needles and some dishcloth cotton (might as well make something useful with my first attempts!). 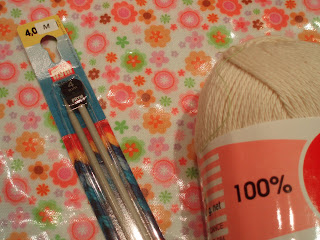 4 - Not diet but eat smaller portions and cut down on the naughty foods.

5 - Praise the boys as well as nag them! With that in mind, I'll do a blog praise of big son.  Now he's not one for sport - infact in his first 13 1/2 years he's not shown much keeness on doing it. Ok so he swims quite well and cycles with MrVV & little son some weekends but sport in general has not interested him.  However when he started High School in September he got dragged to badminton club by a friend - he got on ok and decided he'd join little son at his club on a Wednesday night.  Well last night Bigson & a partner won the inter-club fun tournament!! He was dead chuffed with himself and we were chuffed with him :)

Now I think 5 things is enough to be getting on with - anymore and I'd fail before the end of the month!!

The boys are back to school tomorrow - think we've found everything they need. I start my new life as a SAHM - am sure I'll miss my old job but not the politics that came with it.

We've been promised snow which could make the day interesting for all - boys hoping school might be closed and me hoping its not!!

Have a good week

Posted by VintageVicki at Monday, January 04, 2010

We are suppose to get some snow toward the end of the week. Hope you have an awesome New Year!
andrea

Good luck with the new job...its not easy you know :D xxxx
I am putting my toe back into bloggy waters this week, Christmas hols are my chillout hols and have barely touched the computer x

Good luck with the knitting - you'll love it. We are due a heavy dump load of snow tonight and my two boys are desperate for school to be cancelled! x

We'll have to fight for him!
He's got such a gorgeous little face hasn't he!
10 years of paperwork! You definitely mean business! Have a great week!
Rachel x

Don't think I'll be joining you at stitch n bitch this week - looking like snow might stop play!
What does Mr VV have to say about resolution No. 1?

Oh good for you learning to knit, honestly you won't look back....its such a great hobby. Mind you can be expensive. On my sidebar there is a link to a huge knit group (worldwide) called Ravelry, full of knitty info patterns and such beginners groups, everything you need...enjoy keep warm.