Well what a mixed week so far - my breadmaker pan has died so I'm back to making it by hand (new pan on its way), my sewing machine threatened to die (thank goodness for goggle & some sewing machine oil) and worst of all my lovely little Olympus camera has gone to the camera shop in the sky - goggled lots of suggestions none worked & its terminal :(
The worst thing for a blogger is no camera and a scrummy parcel to open. That happened yesterday lunchtime - the postie knocked with a parcel for me. I took it in and went to get my camera ready for the customary unveiling pics. Switched it on & it went bananas and just wouldn't work :( Mild panic set it and a very sad face appeared :(
Fortunately MrVV came to the rescue and has lent me a camera that belongs to a group he works with. Its taking some getting use to but I've got it to take pics and I can upload them onto my computer & into blogger.
Anyhow this parcel - it was from the lovely Traci at My Handmadehappiness - she was my partner in the Apron Swap organised by the equally lovely Sarah at Red Gingham 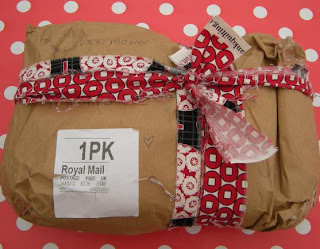 Quite the prettiest packaging I've ever seen :)
Inside, the naughty girl had included more than just a pinny; 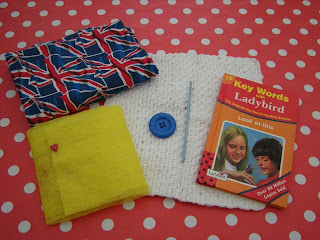 Some UJ fabric, a crocheted dishcloth, a little hook, a huge button, a ladybird book and 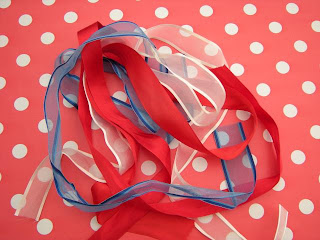 wrapped around it all was this pretty ribbon.
The apron is gorgeous - very pretty and very well made. Now I tried to take a pic of me wearing it but haven't sussed the settings on the camera yet so had to retake the pics today outside - now there's only me here so no model photos - instead the washing line did the honours; 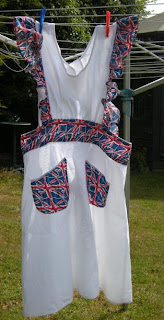 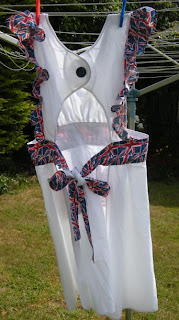 Traci - you are a star - I have loved this swap and all the teasing & laughs we've had. I shall be keeping in
touch and watch out for the postie in a couple of weeks. I've a little idea that needs making and will be winging its way over the Irish Channel very soon ;)
Traci has already blogged about what I sent her but here's a few pics - some of the last ones my lovely little camera took; 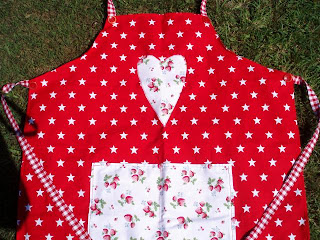 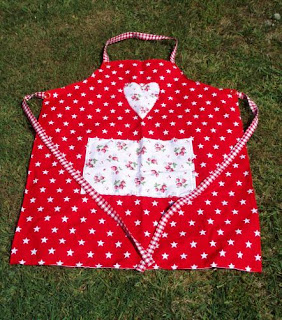 Thank you Sarah for organising this swap - for all your hard work and for pairing me up with a new mad friend :)
The postie has just been again :) and he's brought some special things - more on them next time as the word 'Giveaway' might be on the cards ;)
Off into the sunshine - I have shopping to do and summerhouse to spring clean. Then I'm looking forward to putting together metres of bunting that's half made.
Until next time
xxxx Vicki xxxx
Posted by VintageVicki at Wednesday, May 26, 2010

Wow, beautiful aprons! I love the Union Jack fabric on the first one, it's my current obsession.
Kandi x

hey hey there lady glad your making something and not buying!!!! i hope the book is not a doubler !!!!! and you make use of the crochet hook!!!!! happy wednesday to you and i'll be blogging later i am attempting your banana cake again less heat & some tin foil!!!! wish me luck xx

Great pinny you lucky lady - how sweet to have added a few extras in!

Off to have a look at your swap partners blog now!

What a lovely pinny - infact both are pretty. To get extra's too, how exciting!
x

Two very pretty pinnies here. I need to let you know that I may not make the Suffolk get together. I will try but didn't want to let you down at the last minute. Hxx

What beautiful aprons, I love the style of the union jack one, adorable

Oooh you lucky girl....so many swap goodies lately....you'll be getting a taste for them!! Lol!
Have fun cooking with your new pinny...
Hugs
Karen x x x

P.S I will be doing a swap myself soon..watch out hun!

They are both gorgeous!
I have just finished my Apron, so it will hopefully be off to the other side of the world very soon!

Hope you manage to mend your camera or find a new one. The postal deliveries look good! See you at VS and Woodbridge soon!

How fabulous both of those aprons are!
And so nice to have made a new friend too.
Lisa x

I do love a pinny and they are fab. Nx

They are both lovely x

Oooh I do like me a bit of UJ, love the fabrics you used on yours too :)
More than happy to make you a lavender doll hun, what about a little swap?
God, I'm getting withdrawl already lol but would love to put a parcel together for you.