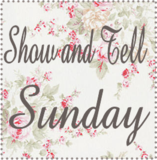 If its Show & Tell Sunday time again then its must mean we're into another new month - the year is going by so quickly!
Now this was never going to be an easy one for me - one favourite piece of china - just one? - impossible. The reason? I've been collecting china for about 20 years now. I started collecting as I used to go every Sunday with my Grandad to car boot sales - MrVV & I were renovating a house - I was supposed to be looking for door fittings & other items to use in the renovations. Grandad used to pick me up bright & early and away we'd go. He was a avid collector of bone china and in those days you were spoilt for choice each week with so many bargains around - it seemed that bone china had fallen out of fashion. It meant that we were there collecting it up! He must own 50 tea sets in so many different patterns - it used to get all used each summer when he & my grandma had a big WI garden party at their house. Sadly they don't do that anymore as it is just too much work for 2 people almost into their 90's. Now I was never one for complete sets (though I have a couple) instead I collected odd cups & saucers & also milk/cream jugs - here are just 3 things from me collection that I love; 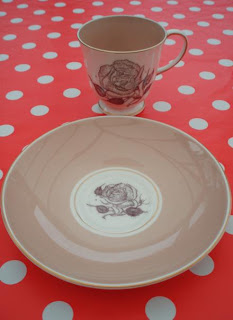 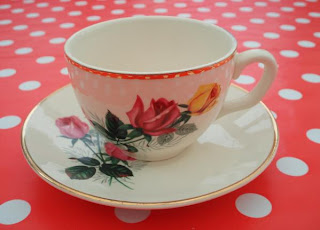 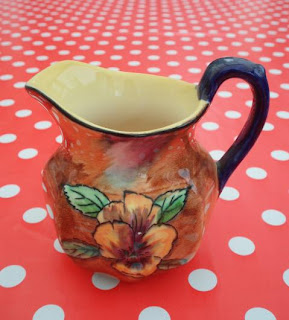 This was given to me by my MIL - it belonged to her mother & her mother before.
Right back into this soggy Sunday I go - roast dinner in the oven.
Lots to tell you - will do that another day.
xxxx Vicki xxxx
Posted by VintageVicki at Sunday, May 02, 2010

Wow your grandparents cupboards must be huge, and very interesting. Love your choices :-)

Truly beautiful - I have loads of cups and saucers that have been handed down to me - I feel like I should open a tea room. Enjoy your roast. xx

Lovely. I was going to join in the show and tell this weekend, but couldn't decide what to show!

It is so lovely reading about your history of collecting with your family! I think that my memories of things with my grandma and mother are part of what make me love vintage things so much. Fantastic bone china!

Such lovely pieces and all the more special to have things that have been passed down the family? I bet you've had some wonderful times with your Grandad.

Love the cups and saucers, how wonderful to have those speical memories

I picked up some stunning pieces of china on Friday during a charity shop fest - I could weep they're so beautiful.

I love the idea of all that china at your grandparents' garden party - bet it was pretty as a picture.

Love your china, especially the rose cup and saucer. I love china, but its not so easy to come by at booties anymore. Your grandad sounds a great guy.

What fun times you must have had with your Grandad.

Thanks for joining in :)
Lovely china & great family story, it's very hard to pick one piece isn't it?
x