How was your Bank Holiday Weekend? Ours?

Well it started so well - I'd promised big son a cake & he got one; 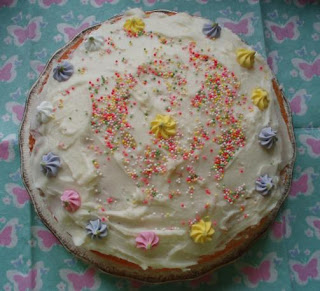 Then we had the first asparagus of the season for dinner - the greengrocers in town gets this delivered each day from a farm only a few miles away; 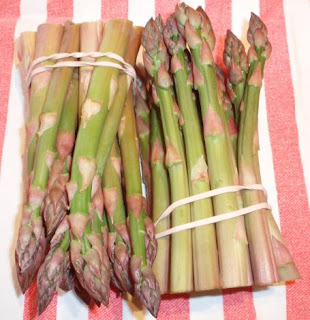 Saturday passed in a blur of domestic bliss and light gardening duties. MrVV & I went to a wedding reception in the evening and I had a jolly good dance with some of my friends.
Sunday dawned rather grey & wet - normally the sort of day where we'd opt for an indoor activity. Sadly for the 2 younger members of the household this wasn't an option. They were walking with their scout pack in the Heritage Coast Walk; 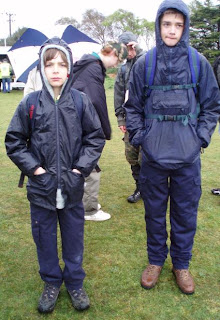 They looked this 'happy' at the start - they looked worse later!! Big son did the full 13 miles he'd signed up to do - his group contained the older more experienced scouts & the weather didn't seem to bother them. Little sons group stopped at the 6 mile point as they were all cold, wet & shivering - the adult with them decided that it wasn't a good idea for them to go any further :(
This morning the skies were still cloudy but the persistent downpour of yesterday didn't look like it was going to happen, so we all wrapped up warm and headed out for the day. We went to a Country & Game Fair at a nearby stately home.  It was quite good and there was lots to see and plenty of stalls to hide in when the heavens did open.
I've had to eat a slice of humble pie today - the reason? Well MrVV bought an 'Indiana Jones' style hat at an event in the Autumn & I've taken the mickey out of him on more than one occasion. Today my head was cold so I bought one too!! and then little son decided he'd buy himself one as well!! 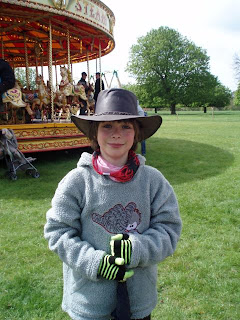 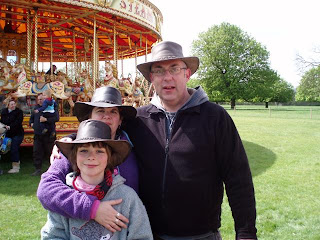 Now it seems that as well as blogland going mad for swaps - its also going giveaway crazy too! Here are just 3 that have appeared on my dashboard today; 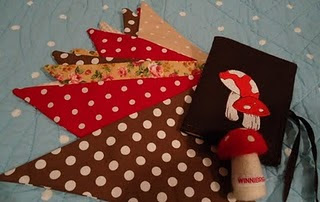 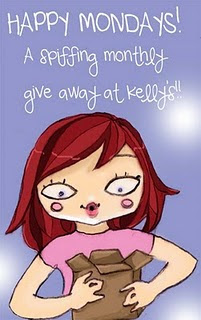 Another Happy Monday @ Kelly's
and finally 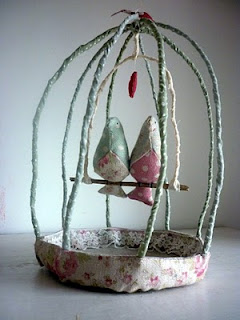 Kirsty @ sixty one A
Oh the cage in the post title? Part of the fairground that was there - MrVV & the boys decided they'd go in this; 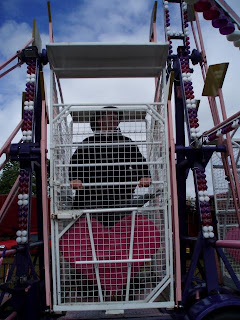 (the boys are hidden behind MrVV)
See you sometime in the week
xxxx Vicki xxxx
Posted by VintageVicki at Monday, May 03, 2010

If you want to get ahead get a hat eh?!

That was good of the boys to go on their walk in that horrid rain. Glad you had a good day at the local country and game fair despite the weather. I can't believe we've had to put the heating back on because its been so chilly!

A bit of a mixed weekend then, your poor boys! Bet they loved the gorgeous cake though!
I'm not surprised you needed a hat it was FREEZING this morning!Loved your china on the last post too!
Have a great week!
Rachel x

Love the cake, love the hats, love the intrepid menfolk! I would have been on the ground taking the photos too!

Sounds like the weather has been pretty rubbish everywhere this weekend. At least your hat will keep you dry!

Have a great week.

Awwwwwwwwwww poor lads walking in that weather. Well done them for doing it though. Cake looks great and as for the asparagus.... yum! We are getting it from the garden now and it is just delicious!

Asparagus...my favourite and that cake looks so yummy.What a shame the weather couldn't hold out for the bank holiday...well done to the boys though.

Well done to your boys. It was such a shame that the majority of the weekend was a washout - roll on the next BH!
x

what a perfectly pretty cake and a carousel!!?? sounds like my perfect weekend!!