And no I'm not in a panic. Taking my own advice - after all its only one day!! Thanks for all the comments on my last Pause post :)
Its been a busy week - so many things crammed into the final week of term - christmas dinners, brass engagements galore and rather a lot of late nights.  Well its taken it toll on the (currently) shortest member of the household :( Little son dozed off whilst watching the end of the brass concert last night and when he woke it was obvious that the lurgy had struck. Hence one small boy spending today on the sofa, snuggled under blankets with a sock monkey for company!!
Looks like he might miss the last day of term - something he's not happy about but I don't think he'd last the day without curling up asleep in a corner somewhere.
I've said before that MrVV mostly works from home and today that was handy. I was able to leave him in charge of the patient and head off out. I was keen to watch my little nephew in his school nativity play.  It was for the whole key stage - about 75 children and everyone has a part however small. O was a star and in my opinion the cutest one ever (that's him under the mistletoe); 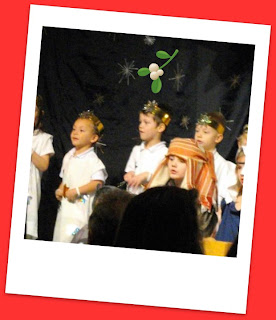 I've managed to add to my christmas decoration collection this week too - I was passing my favourite charity shop the other day when I noticed in the window something I've been looking for - bottle brush christmas trees - 2 of - for just 20p each!! 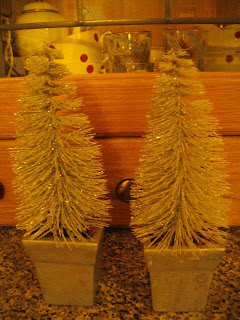 Hopefully by the end of the weekend, they won't feel so lonely as the rest of the decorations and the tree will be up. After this morning I am feeling festive :) Plus the postie has been this week with a Secret Santa parcel for me - I had a poke and prod and then just opened the outer layers; 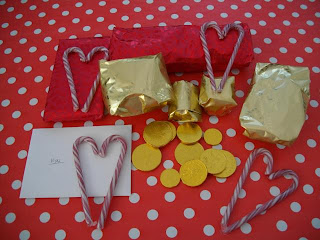 Lots of shiny parcels, a card, chocolate coins and candy canes - thank you Santa - its all been hidden away till the 25th - well except the coins *blush*

See you on Sunday for a final Pause in Advent.

Posted by VintageVicki at Thursday, December 16, 2010

All these activities are what make Christmas I think. I really miss being involved with the school plays (usually sewing dozens of costumes), but it wont be long before my grandson starts school so perhaps I will join in again. Hope your little one soon recovers, I am sure the sock monkey will work some magic.

Oh you are a naughty girl indulging in those chocolates! We are all going to have great fun on Christmas Day opening our Secret Santa gifts aren't we?

Glad you got to watch your cute little nephew and I hope youngest DS is better tomorrow.

I so miss Jess' nativity plays and whilst I don't want my little man to EVER start school, I can't wait for that part of it!
Love your blog header, really made Me chuckle!

Watching the nativity plays always bring a tear to my eye, it's good that all get a part. Fab charity shop bargain too. :) x

Hope your son is feeling better soon! I'm sure the excitement of Christmas will help him get over the lurgy! I'm looking forward to seeing what everyone gets in their secret santa parcels! :) x

Hi Vicki, Hope your son feels better soon. 2 of mine now have the lurgy and they missed their school Christmas party today .Not happy bunnies . It's stopped me finalising my pressie buying too, but I'm not stressing ,yet !
Looking forward to your final "pause "post :0)
Jacquie x

love those little trees.. like you I am hoping to get the decorations up this weekend... and reduce the general level of chaos in our home!!! xx

Hope your boy is feeling better, we've had the lurg in our household too. Better to get it out of the way before next week anyway. Love your little trees!

Hope your boy is feeling better now.Why do these bugs have to turn up around Xmas?
I have some of those little trees,just wondering where to put them! Have been watching the children from different primary schools singing carols on Daybreak in the mornings..so sweet! ;0)