Still cold here in Suffolk today with the added treat this morning of sleet & hail when I was trying to do my jobs in town and cycle to see my Grandma. Not planning on leaving the house now until tomorrow - am wrapped up well and have been keeping warm whilst being busy in the kitchen.
When I was out this morning, I popped into a couple of the charity shops and of course I didn't leave empty handed. This little bunch of wooden soldiers reminded me of MrVV & Little son's band; 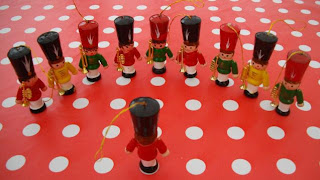 Here's 2 of my menfolk on Sunday. They played in Framlingham for the Christmas Charity Market - for Little Son this was the first time he'd played out with the big band. His junior band were supposed to play elsewhere but that got cancelled due to the weather. Instead it was suggested as he's been practising hard he'd like to come along & play with the other more experienced players. He had a great time and has now arranged to play for a few other engagements with them over the next few weeks. 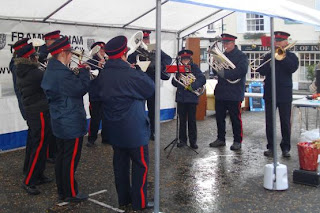 Now I hadn't been to Framlingham for years so in order to keep warm and amuse myself for a while, I took a wander around the town and also over to the castle; 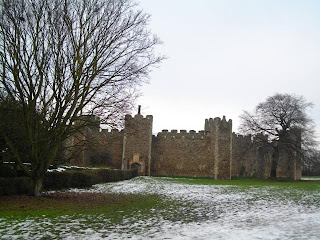 I've been knitting like a woman possessed these past couple of days, I've finished my wrist warmers and made a start on 2 more pairs. A pair the same as mine for a sister and another pair for little son. 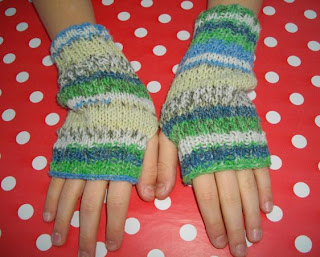 He kindly modelled mine for me this morning before school. The Sirdar Crofter yarn knits up in a random 'fairisle' style pattern - hence they don't quite match and I rather like that.
In return I went and bought the yarn for his - I asked what colour he wanted thinking he might say a sensible colour but then this is little son we're talking about - his request was bright orange - do you think this is bright enough?? 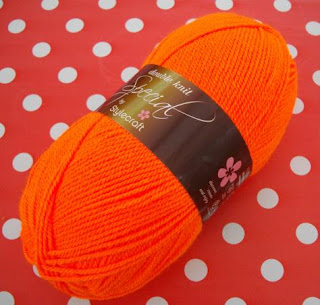 Right time to go back into the warmth of the kitchen - I need to make some cookies for the boys for after school. Big son has had 2 mock GCSE exams today so I think he needs spoiling.

BTW - thank you for all the comments on my header - its definately one of my favourite pics of 2010 :)

aww bless him, love the little figures they were a great find. And those wrist warmers are fab, and the orange he will need sunglasses on ;-)) Keep warm Dee x

Those little soldiers are a fab find. Hope the mocks go well.I used to dread exams at school.
No cold hands in the VV household! :0)

The wrist warmers look lovely snuggly and warm. The orange ones will certainly be bright...making a statement I believe?!

Lovely wrist warmers. I think that orange wool is great, mine all like black or navy and I can't stand knitting in dark colours, if you drop a stitch it's a nightmare is'nt it ? :0)

I love the wrist warmers they are great. I bet little son was really pleased with himself. It is very cold and infact one of our neighbours has just had to park the ambulance they drive outside out house as they just couldnt get to the depot, as it is snowing again

Looking warm & cosy with you & I love your band playing soldiers. Lovely for your son to play in the big band !

Absolutely love your jelly babies! I have just started some wrist warmers with the Crofter wool (in pink colours for youngest daughter) and it seems to be knitting up well. That orange looks the same as one of the colours I am using in my eldest daughter's crochet ripple blanket: do you think we might be related?

The wrist warmers really give a real Vintage Winter feel .

I made some wristwarmers in that exact wool last winter - very useful for cold hands when blogging!

Just the time of year for wrist warmers, I love them. I noticed looking on a website the other day that they had sold all their handknitted socks, I'm glad people are appreciating these though maybe the weather doesn't have to be quite so extreme for handknitting to take off.

I love those wooden soldiers! You seem to be very lucky with your finds. If I'd known you were in Framlingham I could have invited you in for tea and cake!

The soldiers are so sweet! What a great find! Love the wrist warmers too, that orange wool is extremely bright! :) x

awww lovely posty x sweet soldiers and brass band piccys...love your jelly babies in the snow hehehe ;0)x...great winter wrist warmers you need them in this freeeeezzzzzzy weather....
lovely blog x
bless your sweet boy doing exams! i used to shake with fear everytime i had exams...not sure if i agree with all these controlled examinations- think teenagers should have a case file with work they've done through out the year and not be judged souly on one exam for each subject....thats my thoughts anyways x

Lovely wristwarmers.......you beat me there, mine are still languishing in the work basket, so much for the quick project, other makes became more pressing.......crofter yarn is so lovely to work with.

Your menfolk are brave, standing there with frozen toes to keep the public entertained, you must be very proud of them.
florrie x

How cute are those little soldiers!