Oh yes (said in best Churchill the dog voice) tis the turn of No1 son to have a birthday - seems the first 1/4 of the year involves an awful lot of cake making and decorating. Now the old brain cells are struggling at the moment and it took me a while to find any inspiration for what to put on his cake. However during a rare dusting session I happened upon a tub of magnets which get used very rarely now by small visiting people.  After a quick rummage I came up with enough letters for this; 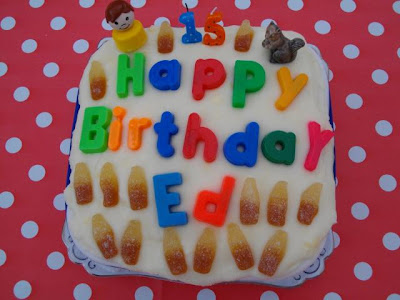 The squirrel is a current injoke which was started by school friends and has spread.
One happy smiling face as he gets to blow the candles out; 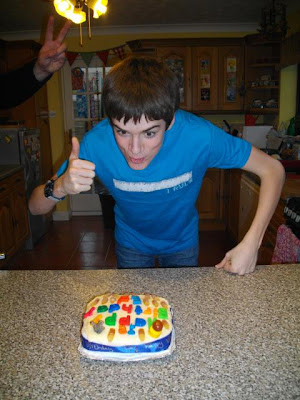 Annoying parent in the background ;)
He was also smiley this morning whilst he opened his pressies - a snazzy new camera, tickets for a comedy show (Tim Vine) and good selection of sweets, clothes and money. Its been tested fully - taking a new facebook profile pic; 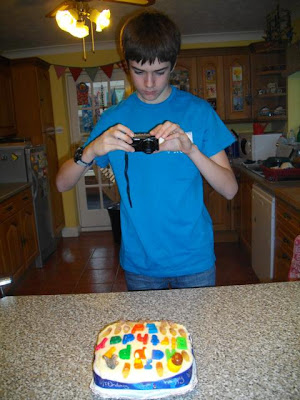 He keep trying to take pics of me too - testing out all the fancy settings; 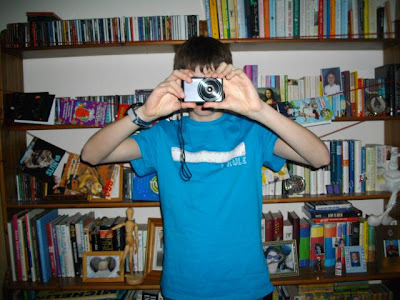 We are off out on Sunday for a birthday meal somewhere and so the money that's currently burning a hole in his wallet can be invested and boost the high streets takings - I think I shall leave him to do that alone and go and investigate some far nicer shops - really the Apple Store and Top Man do nothing for me - give me Paperchase & White Stuff ;)
Thanks for the comments on his room - if you say its tidy then I shall believe you - am sure big son would too after all the last thing he wants to do is too tidy up when he could be slaying dragons or messing around with his new camera. I really don't think I should comment on his muddle having spent ages this morning looking for something in our room - it was there, just buried under a heap of clean washing waiting to go away!!

Oh the postie appeared today with a parcel for me - my Spread the Bloggy Love Swap parcel from Sue - I've opened the outer layer but the parcels are now hidden up until Monday; 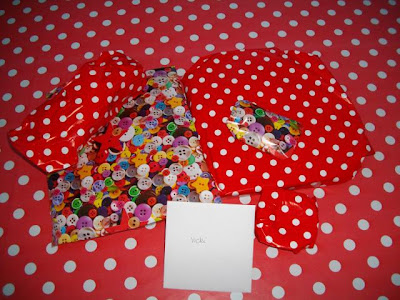 Another amazing cake, I dont know how you manage to come up with them! You must be known as the cake lady of the family. Happy Birthday, hope his enjoying his camera xx

Happy Birthday to your number one son, the cake looks fab, bet there's not much left now! It looks like I've only sent you 2 presents....I have to admit mine still has it's brown covering on.... so that I won't be tempted! Sue Xx

Love the cake! Cola bottles are one of my (ahem) guilty pleasures - yummy!

You are being good, keeping your swap parcels for Monday. I know others haven't been so good, so I definitely think you should give your halo a polish!! Looking forward to seeing what you've got! x

Happy birthday wishes to your son.
Hope his enjoys a big spend up with his birthday booty.
Love the button wrapping paper.
Lisa x

Happy Birthday to your son, he looks very impressed with his cake and camera.

Wasn't today horrible indeed?! Oh do join in with the teddy bear's picnic next week.

That cake is wonderful you clever thing!
Kandi x

Aww happy birthday, that cake looks great i am learning some new ways to decorate from you and having boys there great ideas to ;-)) Enjoy your weekend ahead, dee x

He he, my husband photo bombs our snap shots, man, annoying parent is the only way to describe it. Happy birthday to your household, cool cake, squirrel & all. Love Posie

Awww a Happy Birthday to your wee man. How cool that we have youngsters with the same birthday.
His cake looks great :D

Oh and his room - if my 16 year olds room looked like that I would burst with happiness - I have forgotten what colour her floor is and now just hand her clean sheets etc to change the bed as I refuse to play 'walk the mine field' to get to the bed. LOL

What a fab cake and a great idea to use the letters.Happy Birthday to your boy!
Ooh,wonder what's in those parcels? :0)

I'll look out for you in White Stuff on Sunday!

Happy belated birthday to your big boy, with that snazzy camera you may find him blogging soon!! Nice bedroom (in the previous post), sorry but I don't see untidiness there either but I do see a lovely big space with loads of good things!

Fantastic cake! I would love that for my birthday! Really like the button paper on those presents too! :) x

Another gorgeous cake Vicki :0)
The wrappings on those gifts look so pretty :: Love the buttons one!
I can't wait to see what you got either....not that I'm nosey or anything ;)
have a good weekend. x

what a great cake, seems its birthdays all round at the moment. I have 4 in January and 1 in February! As for his bedroom, if you saw LF's you would count your blessings I can assure you. Dev